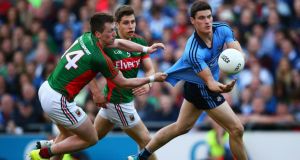 Book shops stayed open through the night when Go Set A Watchman, the ‘re-discovered’ sequel to Harper Lee classic 1960 novel To Kill A Mocking Bird went on sale in July.

The DRA’s full judgement on the Diarmuid Connolly arbitration will be published on the authority’s website but I’d certainly queue at midnight if they were to decide instead to print the decision in book format.

Clearing the Dublin player to take part in last Saturday’s All-Ireland semi-final replay came as a surprise and even if no-one can fully engage with the outcome until the judgment emerges within the next fortnight, the grounds for the decision at first glance appear, as detailed elsewhere on these pages, to be curious.

Briefly there is a view that the basis of the decision to allow Connolly to play was arguments that hadn’t been presented to the GAA’s Central Hearings Committee or its Central Appeals Committee, as Dublin were rapidly ascending the rungs of the association’s disciplinary process.

These arguments were pure technicalities.

In fairness to anyone or any unit trying to elude suspensions or other inconvenient decisions, the higher up the ladder you go the more technical the arguments have to be so that’s no surprise but it’s equally worth bearing in mind that the DRA tribunal did not rescind the red card or interfere with the basis of the suspension – ie that Connolly had hit Lee Keegan and been validly dismissed.

In lectures on the law of evidence the most depressing thing about the subject - possibly up until I enrolled - was sometimes referred to as the “dismal jurisprudence of the breathalyser”. This was the case law detailing the sort of thing that people accused of drink-driving and their legal representatives would dream up to try and avoid being put off the road.

These arguments about whether the ‘t’ in ‘intoxication’ had been crossed in the Garda statement never had anything to do with the substantive argument but were about trying to pick holes in the procedures that had been followed – on the basis that any prosecution must be seen to comply with laws and regulations and be entirely free from taint.

There is something of this desperation about cases in relation to match bans that get as far as the DRA but if they’re going to make suspensions stick the GAA needs to satisfy all the procedural requirements.

Similarly though, if a body is going to overlook the prescribed consequences of a red card the reasons should be compelling.

There are however good grounds why anyone or any unit going to the DRA shouldn’t succeed on the basis of submissions that haven’t already been put to the relevant GAA committees. In other words how can the decisions of the CHC and the CAC be overturned using arguments that they themselves didn’t get to hear?

What usually happens in such cases is that the matter is sent back for re-hearing and although securing a new outcome before the Dublin-Mayo match would have been impossible in the time available, the matter could now be before the relevant committees.

Maybe Dublin wouldn’t have wanted to risk Connolly’s absence from the All-Ireland final were the same ban to be re-imposed and would have withdrawn from the process by accepting the punishment or maybe a fresh DRA application would have ruled it unfair for the player to be suspended in that manner.

One way or the other there will be great interest in this decision because of the controversy caused. What has happened the GAA’s disciplinary structures is that they have been caught in a perfect storm.

Only a couple of weeks ago Kevin Keane, unhelpfully in the circumstances a Mayo player, was cleared of a red card for striking an opponent in a CHC decision that caused widespread criticism. Then Connolly becomes the first high-profile player in a couple of years to take a suspension as far as the DRA.

In the background there is much grumbling and speculating about why Mayo got a player off and Dublin didn’t or how the GAA are soft on Dublin because the county is a cash cow.

So it was the worst possible circumstance for a Dublin player to be controversially cleared to play despite having received an undisputed red card.

The DRA act in place of the courts. For all the widespread and understandable outcry the weekend’s decision provoked, it’s not the place of such a body to be popular so it reaches what it regards as the correct decision in keeping with the maxim that justice must be done even though the heavens fall.

At the same time its decisions must be justifiable and stand up to scrutiny. There is concern that what happened in relation to Connolly has proved so controversial – it is believed that one of the three Tribunal members will issue a strong dissenting view – at a time when public perception of the GAA’s disciplinary processes is at a low point for recent years.

It is well to remember that the DRA is operated by people who are as much volunteers as players and most administrators. It has worked tremendously well for 10 years in one of its primary purposes of stopping opportunistic injunctions being taken out against the association.

Its success – and to be fair that of the improved systems within the GAA – can be seen in how rare cases like Connolly’s have become. Although there is great dismay about what happened, there’s no point throwing the baby out with the bathwater.

As a body independent of the GAA, the DRA will come to unpopular decisions from time to time. All that can reasonably be asked is that they are substantiated when published.

In other words, this better be good.