Minor and Under-21 championships to be regraded 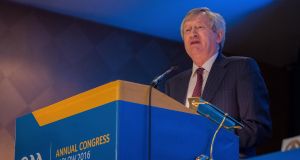 In a ground breaking congress decision, this year’s GAA congress at Mount Wolseley, Carlow, voted on Friday night by the narrowest of margins to break with nearly 90 years of tradition and regrade the minor age group from under-18 to under-17 from next year. The minor All-Ireland championships date back to the late 1920s.

In what was considered an even more surprising move, the proposal to reduce the under-21 inter-county football championship to under-20 and maintain it as a development grade – those involved will not be eligible for senior inter-county – played during the summer was also passed.

The proposal, motion 4, brought forward by Central Council, is one of the recommendations of the discussion document published by GAA Director General Páraic Duffy in November and addressing the associated problems of burnout and club fixtures.

A succession of speakers supported the change, citing the need to support young players by removing most minors from the Leaving Cert cohort and making them ineligible to play in senior club competitions.

There were speakers supporting the reform from Tipperary, Westmeath, Offaly, Laois, Monaghan, Leitrim and Wexford. Delegates from Kilkenny and Cork spoke against. The motion was passed by 68 per cent to 32, just on the margins of the requisite two-thirds majority.

There were fewer contributors on the under-21 proposal, motion 5. Again Cork opposed and were joined by Derry but strong contributions from Armagh’s Jarlath Burns, Dermot Earley of the GPA and former president Liam O’Neill.

Speakers urged delegates to ease the congestion in the early part of the year by moving the under-21 championship to the summer and to ease the burden on young players.

Earlier in the evening there was no mood for radicalism, as the GAA decided to make no change to its senior inter-county football championship.

Proposals from Roscommon and Carlow failed to attract sufficient backing and were beaten 17-83 and 40-60 respectively. The Roscommon motion, number 56, was opposed by the GPA, as it incorporated a secondary championship, which the players’ body oppose.

Carlow’s proposal, motion 57, wanted to introduce seeding into the All-Ireland qualifiers. It received more support but was well short of the necessary two-thirds majority.

GAA president Aogan Ó Fearghail told delegates that Central Council had accepted that all of the counties likely to be involved in the secondary competition were opposed to taking part and the council had accepted that and decided not to proceed. There had been strong indications that the motion wouldn’t have received anything like the support necessary to be adopted.

The players’ body, the GPA, also re-iterated its opposition to the motion. The association repeated its call for the establishment of a sub-committee to look again at football championship reform.

The dropped motion was the last surviving proposal of an exhaustive trawl by Central Council through the counties seeking ideas to improve the football championship. Eighteen proposals were received, of which none now remain.

Eamon Barry, the former Meath manager, spoke in the debate on the Director General Páraic Duffy’s report and drew attention to the well-publicised disparity between what Dublin draw down in games development grants - 47 per cent of the global figure - and what the rest of the country receive.

He said that whereas Meath had just three full-time and three part-time coaches, Dublin had up to 60.

“Staffing levels are way, way behind Dublin and yet we’re expected to compete on the same level. We can no longer cope and need at least 12 full-time coaches in the county.”