Mickey Harte has earned the right to choose his own destiny 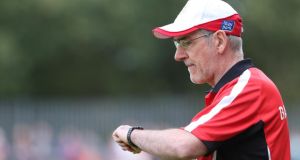 Tyrone manager Mickey Harte is surely contemplating how he will know when his tenure should end. Photograph: Andrew Paton / Inpho / Presseye

Mickey Harte has been in charge of the Tyrone senior football team for the last 12 years. In that time, he has won their first 3 All-Ireland titles, taken the team to extraordinary heights, and in many ways made them one of the truly great stories in the history of the GAA. But at some stage in all that time, maybe even at the height of his success, was there a moment when Harte looked at himself and thought - ‘how will I know when it all should end?’

If he has never asked that question before, I’m sure he’s asking it of himself now. Not necessarily answering in the negative or affirmative just yet - but surely posing himself the question. It’s a safe bet to suggest that a defeat at home to Armagh, in the qualifiers, would not be the sort of way he’d like to exit.

A defeat to Armagh akin to the defeat in the 2005 Ulster final replay, or maybe even deeper into summertime in an act of orange-shirted revenge for the All-Ireland final defeat of 2003, would at least have an operatic quality to it. But with the eyes of the GAA world fixed on provincial finals elsewhere, Tyrone were eased out the door without a whimper. Only two scores from play in the entire game, being held scoreless for the last 20 minutes of a championship match against your fiercest rivals . . . these are not statistics that you would associate with a team which has a bright future ahead of it.

It’s not always easy to see the wood for the trees - when you think of Mick O’Dwyer’s Kerry, you think of the eight All-Irelands in 12 seasons between 1975 and 1986. You don’t hear much mention of the three years after ‘86 when Kerry couldn’t get past Cork in Munster; and yet there they are, not a blot on O’Dwyer’s copybook, but a reminder that even the greats don’t know when their time is up. It’s easy to say he should’ve left in 1986, but hindsight is 20:20.

It could also be said that Seán Boylan stayed on too long in Meath, but Boylan had at least won All-Irelands with 2 completely different teams. He had shown an ability to build a team, and then as they departed the scene, to build another team. O’Dwyer won his All-Irelands with an extraordinary group of players, and when they faded, as all players must, O’Dwyer was blinded by his loyalty to them.

Stephen O’Neill won an All-Ireland minor title in 1998 under Mickey Harte. He won under-21 All-Irelands in 2000 and 2001. Stephen O’Neill owes Mickey Harte everything, and that trust runs both ways. When Harte turned around to his bench to survey his options on Sunday, was it any wonder that he put his faith in the man that he had relied upon for the last 16 years? Of course not. Does the 1998 All-Ireland minor title have any bearing on who is best-positioned to influence a Round 2B qualifier between Tyrone and Armagh in Omagh in July 2014? Maybe that’s another question for Mickey Harte to ponder.

Mick O’Dwyer was bequeathed a hugely talented crop of players, a group which he subsequently cajoled into winning more All-Irelands than they could probably have thought imaginable. His magic wasn’t in getting them to the top - it was keeping them there. It can justifiably be said that Mickey Harte found a group of young men whose birthright was to lose in the Ulster championship more often than win, and transform them into winners. First at minor level, then at under-21, and then most gloriously at senior. Brian Cody and O’Dwyer may have won more titles, but Harte’s achievement stands alongside them, without doubt.

His loyalty to that group of men is unquestioned. His book, entitled ‘Harte: Presence is the Only Thing’, written in conjunction with Michael Foley of the Sunday Times, is an extraordinary tale of how deep and lasting the bonds of fraternity are between him and those players. The relationship went way beyond that of a manager and his players - tragedy and circumstance demanded it.

As he sees those same men retire, or worse, fail to dominate games in the same way as they once did, maybe the safe thing to do is to leave it to the next man to try and work that same alchemy with the All-Ireland minor winning teams of 2008 and 2010. The brave thing to do is to stick around and see if he is the man to work that alchemy . . . but that bravery, like O’Dwyer trying to squeeze one more All-Ireland from legs that had given up, looks to be misplaced. He has said he wants to see out the last year of his current contract, and the least he deserves is the chance to leave without being pushed. History won’t judge him unkindly whatever he decides to do.

1 Kevin Babington: Learning to live again after life changed forever on Long Island
2 Diminished Dele Alli shows the gulf between talent and expectation
3 Matt Williams: The sky is not falling in on Irish rugby - but Ireland do need a new plan
4 Tour de France: Every yellow jersey winner must feel guilty by some association
5 Can Thiago bring the right dynamics to save Liverpool from entropy?
Real news has value SUBSCRIBE

Rob Howley ready to start again with Canada after betting ban 10:36
Japan’s new prime minister insists Tokyo 2020 will go ahead 10:28
Diminished Dele Alli shows the gulf between talent and expectation 09:00
Can Thiago bring the right dynamics to save Liverpool from entropy? 09:00
Sam Bennett: ‘A green jersey in the Tour de France is such a highlight of my career’ 07:30