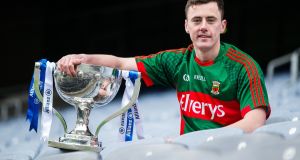 Although it wasn’t a rookie season – he made an isolated starting debut in 2014 – Mayo’s Diarmuid O’Connor was one of the most notable arrivals on the inter-county scene last summer.

His work rate and ability to kick scores from wing forward gave him a shout at an All Star and earned him the Young Footballer of the Year accolade.

The O’Connor’s mantelpiece was a familiar location for the trophy, which older brother Cillian had twice won.

The championship exit was also familiar for Mayo though – defeat by the eventual winners, in this case Dublin.

Neither was the drama done with the replay defeat. By the end of the month a players’ revolt had forced the resignation of joint-managers Pat Holmes and Noel Connelly.

“Everything has been great so far, Tony (McEntee, coach) and the other lads all have had huge success in the past. Unfortunately I’ve just been working closely with the medical team so I haven’t gotten to work closely with the backroom team yet but I’m looking forward to getting back on the pitch.”

He hopes to make it back onto the field in time to play some role in DCU’s Sigerson Cup defence later this month.

That and the excitement of new management have helped to start the year in positive fashion but the defeat by Dublin after two matches that Mayo might have won lingered for a while.

“It hurt now for a few weeks especially when you are not doing anything after the game.

“It’s not just a couple of things; it’s thousands of little things you can improve on. You can dwell on them all you want but I’m just trying to focus more on this year and looking ahead rather than in the past.

“It’s a new panel this year again, new management – everyone has a clean slate. It’s a brand new year. We’re trying to not forget about last year, but just to focus more on this year and see what we can do.”

Sunday’s FBD Connacht League match between Mayo and Roscommon has been switched from Hyde Park, which is unplayable to Castlebar. Throw-in remains 2.0.