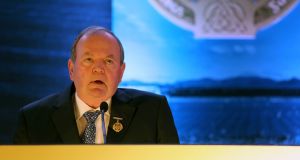 Liam O’Neill believes that the overriding need is for patience and candour. Photograph: Andrew Paton/Inpho

Former GAA president Liam O’Neill, who made a powerful plea to last Friday’s remote special congress to forget about playing games this year, isn’t impressed by reminders that the All-Ireland championships have never failed to take place for more than 130 years.

He does, however, understand unease at the idea that such a sequence might be broken.

“Of course, but balance that with a year when you could lose, as they have in parts of Italy, almost the entire grandparents’ generation,” he said. “It’s frightening and the thought of losing anybody that you don’t have to lose for the sake of keeping the history books up to date is awful.

“We can deal with the 2020 championships any way we choose – play them in 2021 or whatever – but I’d like history to record that the GAA put its people first over everything; that we said we’d lead our people through it as best we can and will be there at the end of it to play our games.”

On Friday, he was speaking in support of the proposal – carried unopposed – to give the association’s management committee special powers in the current coronavirus pandemic.

It was a well-received contribution that reminded delegates that community and people were at the heart of the GAA and that the games were simply an expression of that connection and not the primary purpose.

O’Neill, who was president between 2012 and 2015, elaborated on his comments to The Irish Times, saying the GAA’s concern would be directed at health worries in the community and referring to the state of apprehension amongst families.

“It has never been more starkly put to us that generations count. I’ve spoken to friends over the weekend just asking how they were, people who have young children and parents – three generations. They’re not even thinking of games. People are afraid of this thing, afraid of taking chances and afraid of compromising older people.

“Then there are those leading perfectly normal lives as part of their GAA clubs and part of the community and their children have a condition like asthma. This is not just about games; it’s about a wider vulnerability that should make us stop and think that the safety of our people is paramount.”

Friday’s special congress took place before comments by Minister for Health Simon Harris at the weekend, when he cast doubts on whether major sports events could take place at all this year – O’Neill was already of that view last week.

“On the wider question, people think county teams can play. They can’t. It’s not going to happen for the foreseeable future and somebody has to say it. Unless there’s a cure you can’t go out and it’s as wrong to do it now after we’ve all invested a month in it. We’re not going to throw that away now for the sake of getting impatient. People have sacrificed their jobs, their lives as they knew them.

“There’s no point in saying, ‘well, in six to eight weeks – we have to give people hope and go out and put on matches behind closed doors’. In other words, we’d be asking players to go down and breathe in the same air and potentially compromise each other.”

The GAA hierarchy is unsurprisingly keeping an open mind on the matter, given that there is no certainty either way. The purpose of the special congress was to empower the association to move quickly if the opportunity arises. There is greater optimism about the prospects of club fixtures being able to take place – optimism O’Neill, a retired school principal, doesn’t share.

“Even the talk about re-starting at club level ignores that this is where there is most vulnerability. Then someone suggested that you could send children out in groups of five where they’d be touching the same ball. The natural urge of children is for physical contact with each other and to congregate and be friendly.

“My wish for the GAA is that we do nothing until it is 100 per cent safe. Anything else compromises the safety of our people, our communities and our clubs.”

He knows that there is a growing desire among the public as well as GAA members to see a return to the normality that the annual championships represent every summer but believes that the overriding need is for patience and candour.

“We have to be honest. The populist impulse is to say, ‘ah, we’ll get back’ but it has to be said, ‘do you know what – we’ll get back when we know it’s ok to do it’. We’ve given the power to a 15-man group to do that and they will be able to react quickly when the time is right.

“We’ve come through bigger things than this – upheavals, rebellions, a civil war – and the GAA was always there to help to rebuild a community. We’ll be there when this is over and as relevant as ever. What happens to our community happens to us.”