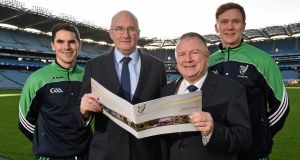 Leinster Council has outlined plans to raise playing standards in the province. These include taking a direct role in the senior teams of certain counties, the hurlers of Offaly, Westmeath, Carlow and Laois.

John Horan, provincial chair, outlined the challenges facing the province despite an apparently satisfactory year at the end of which both All-Ireland titles have been won.

“Ultimately we’ve put together a plan we hope will lift Leinster. We’re not naive. In real terms we have the Liam MacCarthy and the Sam Maguire in Leinster but that’s only papering over the cracks.

“Do we have a competitive championship in hurling and football? You’d have to say that Kilkenny and Dublin are out-stripping everybody else.

“A lot of the other counties in Leinster wouldn’t have that, particularly in hurling. In Kildare for instance Naas outstrip everybody. That’s where Dublin come from: competitiveness and capacity.

“That in its own way is sharpening their edge when putting minor squads together. They don’t have to apply as much in terms of development squads. So that’s where the two of them are.”

To address the situation in hurling the provincial plan envisages direct assistance to the four hurling counties concerned.

“What we’ve actually done,” said Horan, “is we’ve engaged with county boards and got them to get the right people in to do the right jobs and we’ve made the links with them into the colleges.

He also said that initiatives such as cross-border leagues would help counties develop their game by providing competitive matches at under-age level.

“No matter what you say, competitive matches are far better than any training sessions. We can train and coach the life out of kids but they’ll never improve unless we provide a competitive environment in which they can actually perform those skills that we’re teaching them.”

He paid tribute to Kilkenny trainer Michael Dempsey, who was particularly involved with the project and who according to Horan, “put in great time and effort to go around the counties to work on the plan and the interviews and the report. He’s a busy man with his job in Carlow IT and his responsibilities with the Kilkenny senior hurlers but Michael Dempsey played a huge role.”

He was asked was it not unprecedented for the council to get involved with county teams.

“We were doing it as a supporter rather than an inspector. And I think in that sense, they all embraced it.”