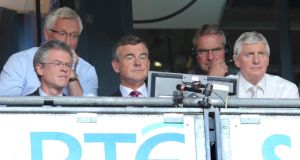 On Sunday evening, I came in the door from Celtic Park and went to check the GAA championship results. Celtic had been presented with the league trophy and had won the last game of the season 5-0 against Inverness. So in Glasgow – well, half of it anyhow – there was a mood of celebration.

A night out for the team and management was planned so I was just at home to get ready for that.

When I was looking up the results, I immediately saw reports about the comment Joe Brolly had made about Marty Morrissey on The Sunday Game. And it was on my mind all evening.

Joe apologised for the remark he made about Marty live on the programme. It was offered in jest and the programme moved on. But I think the incident is like a window to a bigger issue which has been damaging to RTÉ and to its coverage of Gaelic football.

The Sunday Game is considered to be the blue riband programme of RTÉ’s sports coverage. It is supposed to be something that exudes class. But in some instances it can look more like crass than class. Sunday was an example of this.

During my time managing the Donegal team, we were on the receiving end of a lot of extreme criticism. Personally, it didn’t bother me. That doesn’t make it all right but during these times I am not sure how it affected my family or some of the players involved.

It needs to be remembered these are amateur players. They are, by definition, unpaid. And the managers are unpaid volunteers. That has somehow become lost.

“The Black death of football.” “Puke football.” “Farcical tactics.” What are these all about? When did this start becoming part of what we do? And in what other sport does this happen? And it seeps down into the detailed analysis. For instance, the description of a wide as being a “horrible” wide is another example. Horrible is a horrible word. It is easy to choose another. A player doesn’t go out to kick a “horrible” wide. He is doing his best. And he is sitting at home watching and hearing this. It would be easy to feel about two inches tall.

It is about pushing boundaries. For me, RTÉ should control the content but I feel in many respects they have sat on their hands and let the sensationalism evolve. I enjoy opinion and strong opinion at that. But there is a very important line between opinion and disrespect. People have a right to express their opinion but when their comments cross over into disrespect, it is an issue.

Many of these players are shaping their lives around football so they can play with their county. It is a big commitment and they deserve respect. I have travelled enough in my life to know there is a friendliness and humility about Irish people. At times those qualities are lacking in the coverage of the football championship. When I watch the hurling analysts, I see people engaging with one another with respect for the game and its participants, they give their opinions with a sense of fun and humility and offer a really good analysis of the game. I get a warm glow watching their exchanges.

The peculiar thing about the GAA is that when you see a big championship game in Croke Park, it looks and feels to all the world like an elite sporting event comparable to the NFL or the English Premier League and it has all the trappings that go with that – including media coverage. But the only people making nothing from that event are the players and management yet they are subject to this intense scrutiny and, increasingly, to disrespect when the line becomes blurred.

Base level of respect

What I would like to see happening is a return to basic human values when it comes to analysing Gaelic football. I don’t recall it being this way when I started playing 20 years ago. You can’t disparage people who are out trying to do their very best in an unpaid capacity. You can have a strong opinion about them but you can’t disrespect them in the language that you use to talk about them.

The culture of sensationalism may get ratings up but there is always going to be a human cost. And that human cost at the weekend was Marty Morrissey. But it will be someone else soon enough. Once something is said about an individual in any media, the impact of those words can affect that person for a long time. The broadcast ends and the debate moves on but the person at the centre of that debate can carry the criticisms with them and it can damage them.

RTÉ has a great reputation when it comes to covering sport. RTÉ and Ireland lost one of its great broadcasters yesterday in Bill O’Herlihy, who always did it the right way. And on The Sunday Game live show, Michael Lyster always tries to moderate fairly.

I have come to know some of the RTÉ journalists through my time with Donegal and hold them in very high regard. Marty Morrissey is one of those. He is a human being and as it happens, he is a great human being. But RTÉ have allowed this to happen with the coverage of Gaelic football by sitting on their hands and now it has affected one of their own staff members.

It is about setting an acceptable standard. If the view is that it is all about driving ratings, then fine. But it is morally wrong. I believe you can have high ratings and strong opinion without having outright disrespect. What happened with Marty Morrissey is a perfect opportunity for RTÉ to look in the mirror and to think about going in a different direction.

And that’s my opinion.

1 Ireland to stick with winning formula against England
2 Wales cry foul over Furlong’s scrum technique
3 No happy returns as Atlético hold Liverpool at bay in Madrid
4 On healing and wild hurling: The re-education of Diarmuid Lyng
5 Gerry Thornley: England primed to show their best against Ireland
Real news has value SUBSCRIBE