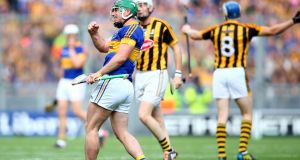 At this rate RTÉ will have to add a new category to their end-of-year sports awards: “Most Memorable Telly Interview of 2016.”

There’d be a fair few contenders too, among them, need it be said, the O’Donovan Brothers (multiple entries), Michael Conlan’s mighty Rio *!$#^! contribution and, from Saturday, Briege Corkery on TG4 after Cork qualified for just their 11th football final in 12 years: “It’s great to be back there again, we’ve a huge task ahead of us in three weeks’ time, but we’ll put the heads down and arses up!”

Possibly anticipating the Montrose switchboard lighting up, Ger Canning apologised for O’Dwyer’s “understandable exuberance”, and understandable it most certainly was. If you’d been closing your eyes and pulling like a dog with your heads down and arses up since 2010, all to no avail, you’d be a bit exuberant too.

And if you’d been told Gaelic games were struggling this summer, after the boys of Dublin and Kerry played out that football semi-final zinger, after both camogie semi-finals were decided after extra time, after the women of Dublin beat Mayo with the last kick of the game in their football semi, and after that Tipp masterclass, if you were a devotee you’d be entitled to reply: “How d’ya like me now, baby?”

“2011: turned over in the All-Ireland final; 2012: badly beaten in the semi-final; 2013: beaten in Nowlan Park; 2014: lost the replay. We talk about hurt? They should nearly have a second bus coming in today with the hurt that’s built up over the last six years.”

So then? “It’s delivery day for this team today.”

No pressure, and they didn’t display much, going in at half-time two points up. A narrow lead, though, and Kilkenny, as we know, are Kilkenny. Any advice for Tipp from Ger Loughnane? Yes. Go out and do unto Kilkenny what Kilkenny had often done unto them: “Bury them.”

These things, of course, are easier said than done, and Kilkenny being the possessor of several feline lives, they often need to be terminated repeatedly. And when they got that goal early doors after the break, you sensed they were far from buried.

But. Over on Sky, as the half wore on, Nicky English struggled to maintain his impartial composure. “KILKENNY ARE BEING OUT-KILKENNY-ED!!!!”

Not easily, as Kilkenny discovered, and with Bubbles and John McGrath being a bit useful too, it was an attacking force that will give that Kilkenny rearguard nightmares until kingdom come.

But . . . they were beeping champions of Ireland.

And in some style too. Relentless.

“I’ve never seen, in all my time looking at hurling, a display like that from the Tipperary full-forward line, unreal – Bubbles O’Dwyer, Seamus Callanan and John McGrath gave three of the greatest performances you’ll ever see,” said Michael Duignan. Ger nodded. There was a grin – the Cats had been buried.

Brian Cody, though, earned himself a nomination for that Most Memorable Telly Interview of 2016 category.

You’ve half a notion that they’ll close their eyes and pull like a dog with their heads down and arses up to come back again. For now, though, it’s Tipp’s time. Hats beeping off.