Tony Kelly can guide Clare to victory over Waterford again 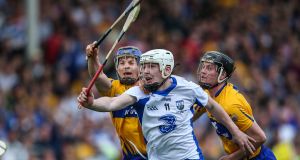 So, what has changed in a month? Not a whole lot.

Clare and Waterford meet on Sunday in Semple Stadium for the third time in six weeks. Even the cigarette paper that separated them at the end of the league final replay was contentious after a questionable sequence of refereeing decisions resulted in a two-point swing against Waterford.

It’s not a distortion to say that Waterford should have won both days. Their tally of missed frees proved debilitating the first day and in the replay they were sunk by the inability to protect a two-point lead in injury-time or to make more of a match in which they only trailed on the scoreboard for literally seconds, including the critical ones just before the final whistle sounded.

The problem now for Waterford is the readjustment that has to be made.

On one level they have been tutored by an extremely bitter experience but on another the haunting thought must hover: what more have they to do to put away Clare.

Congestion caused by the sweeper systems of both teams made – and will do so again – the middle third impenetrable and in that claustrophobic environment frees were conceded.

Although dead balls accounted for one third of the scores for both teams, the accuracy rates weren’t that high at various stages.

The injury scare surrounding Patrick Curran has cleared with his hip showing apparently no ill-effects after a knock in a club match.

How these various adjustments play out remains to be seen but they’re unlikely to trigger a decisive tilt towards one side or the other.

There are however reasons why Clare deserve to be favourites.

In a series like this it’s usually the losing team that learns most from previous matches but on this occasion Clare have got their lessons for free given Tony Kelly’s intervention in the dying seconds.

Kelly is the key figure in this match as he improved significantly between the draw – his first start of the league – and the replay.

If he maintains that trajectory Waterford will have a real issue in shutting down his unparalleled ability to find space in a coalmine and his accuracy from distance.

Waterford’s more scattergun shooting is familiar and even if there is an improvement in the dead-ball productivity that general lack of precision with which they squandered control in the replay cost them their league title and it’s not certain that will improve even though the talent of Curran and Shane Bennett will continue to pose menace.

Clare also showed – and were required to show – more resilience over the two days.

They faced what looked like fatal deficits at the end of normal time in the first match and in the second and yet found the answers. When under the cosh at different stages they calmly showed greater economy – overwhelmingly through the sheer dependability of Conor McGrath – with opportunity while their opponents were squandering theirs.

The league champions also have greater experience and look to have recovered the direction of three years ago and it is in a way a tribute to a fast -evolving Waterford side that this remains little more than a 50-50 call.

However what small margins are in it though favour Clare.