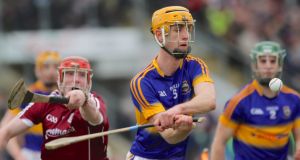 Tipperary’s Barry Heffernan in action against Galway in the league in March. Photograph: Mike Shaughnessy/Inpho

As a result, the 20-year-old was stood down from all hurling matches until further notice.

However, the first blow is believed to have occurred in December with another concussion picked up against Cork during the national hurling league encounter on March 20th. Heffernan was replaced by Willie Ryan after 52 minutes.

The third incident occurred while playing a county championship tie for Nenagh Éire Óg against Templederry Kenyons on April 10th when he left the field late in the game.

In the meantime, Heffernan has been unable to play club hurling or sufficiently pass return-to-play protocols to feature against Cork at Semple Stadium on Sunday.

“It’s something that’s creeping into the GAA. Lads are getting fitter and stronger and the game is played so fast. It’s something you would have only associated with rugby, but I’m seeing a lot more of it now in the last two years in hurling.”

The Clare management, acting on medical advice, recently ruled Paul Flanagan out of the league final against Waterford, nor did he feature in the replay, after the player sustained a concussion in the semi-final victory over Kilkenny.

“The fact that attention was drawn to a player that had been concussed and it was determined he wasn’t ready to return to play is indicative of how serious inter-county managements are treating these things,” Ryan told the Irish Examiner.

“He had obviously been assessed by the medical team and it was realised he couldn’t play against Waterford in the league final. It was clear there had been a diagnosis reached and concussion protocols have been followed all in the interest of the player. There was no message or attempt to short-circuit the recovery period. It was clear what Clare wanted to do. They were focusing on doing the right thing.”

With Heffernan ruled out, Séamus Kennedy is now likely to make his debut on Sunday. Tipperary and Cork both name their teams tomorrow night.

McGrath couldn’t make it up to Croke Park but Kilkenny spoke to the gathered journalists before returning to his studies. “Everyone is buzzing about the game,” said Kilkenny of the decision to play the Leinster football quarter-final against Laois in Nowlan Park on June 4th. “My own club are getting a bus down to the game, I think there’s a festival on at the same time.

“It’s a brilliant pitch. I don’t know what Brian Cody thinks about us playing in Nowlan Park. It’s a nice surface for football, a real kind of compact stadium, so there’ll be a great atmosphere there as well.”