Tipperary have too much for Limerick as they seal MHC title 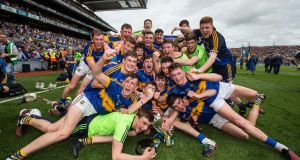 Morris scored 1-4 from play in the Munster final victory over the Shannonsiders and collected 1-3 as Tipp claimed the Irish Press Cup for the first time since 2012.

But not even those scoring exploits could earn provincial final man of the match Morris the individual accolade on this occasion.

Instead, that honour went to Colin English as the Fr. Sheehy’s star landed four points from play during the course of an industrious display.

English suffered the heartbreak of All-Ireland minor football final defeat last year but he made up for that with a precious medal in the small ball code.

He said: “Everything from the start of the year was about redeeming ourselves but there was real focus from the panel, players, and backroom staff there.

“It’s unbelievable to finish it off.”

Tipp walloped Limerick by 17 points in the Munster final but, as anticipated, this All-Ireland decider was much tighter.

And English insisted that keeping Tipp’s feet on the ground wasn’t an issue - despite that massive semi-final victory over Galway when Liam Cahill’s young guns registered seven goals.

He said: “It wasn’t really a challenge at all, the players stayed level-headed and focused.

“After the semi-final, the heads went down again and back to work.”

At half-time, Tipp were 0-9 to 0-8 clear against a Limerick side that registered eight first-half wides.

Tipp led 0-8 to 0-3 approaching half-time but Limerick, who had the best sight of goal in the opening half when Conor Boylan was denied by Ciarán Barrett, hit four points on the spin to bring themselves right back into contention.

Limerick free-taker Brian Ryan was in excellent form in that first half - scoring all four awarded to his side.

But Ryan missed a crucial one after the break that would have drawn Limerick level and when Morris slammed home the only goal of the game in front of Hill 16 in the 34th minute, there was no way back for Limerick.

Morris was fortunate, however, to avoid censure seconds later when his off-the-ball tangle with Josh Adams was missed by the match officials.

TV replays showed Morris lashing out at his opponent but the Nenagh Éire Óg star stayed on and rubbed salt into Limerick wounds by scoring another point.

Limerick hung in grimly as Kyle Hayes shot narrowly wide midway through the half but Tipp, who had a big scoring contribution from sub Shane Neville, were doing enough to keep Pat Donnelly’s charges at arm’s length.

Tipp went close to a second goal when Ger Browne forced a save from Mark O’Kelly four minutes from time and they closed the game out with the final three scores of the game - including three in stoppage time.

Limerick did begin in positive fashion as Ryan’s early free was verified by HawkEye but Tipp led all the way to the finish following Lyndon Fairbrother’s free in the eighth minute.

1 Golf in Level 5 Covid restrictions: Clubs still waiting to hear if they can remain open
2 Hugo Keenan could start in changed Ireland team against Italy
3 Man United’s latest Parisian party more impressive than heist of 2019
4 Gordon D’Arcy: Ireland don’t need to do a Finn Russell on it
5 All-Ireland Under-20 football final postponed due to Level 5 Covid-19 restrictions
Real news has value SUBSCRIBE