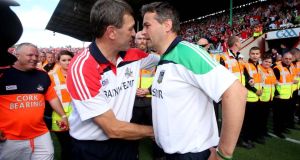 In the fuss we made over Clare’s All-Ireland, the team on the receiving end got forgotten. A group of players that had to go home and lick their wounds after playing in three finals in 2013 without winning any of them.

A young side, most of whom had never won anything with Cork, who had to go back and present themselves to a people who hadn’t seen a trophy of any sort since 2006.

Nobody would have thought any less of Jimmy Barry-Murphy had he failed to deliver this one but that doesn’t mean he didn’t need it badly.

He needed it for his players, to put a stop to any creep of insidious thinking that days like this are the preserve of other counties.

“I think it takes out of the equation that you’re not a team who can win things on the big day. We lost the Munster final last year, drew the first day and lost the replay of the All-Ireland final. So from that point of view it does come into your head that the players might start to think, “look, will it ever be our day?”

“Needing it and getting it are two different things. Lots of counties want to win things, we do too. But it’s fair to say the finals we lost last year were bitter pills. Those were hard to take for the group and right through the National League there was a bit of a hangover. Since then the lads have done great, since the Waterford draw the lads have upped the ante.”

“I know, I was just saying there that 2006 is an awful long time to wait for success. We’ve had following throughout the years and unfortunately we could never reap the rewards we deserved I thought. Thank God today the Munster Cup is back on Leeside, ’tis a great old day for the lads who put a lot of effort into it. Thank God this team got what it deserved, a bit of silverware.

“I suppose it’s always in the back of your mind. It’s one day at a time, but we talked about it and it was all in the past. We just said, ‘wouldn’t it be great today lads if it was Pa Cronin going up to collect the cup rather than the opposition?’ And everyone put their shoulder to the wheel the last few weeks. We knew we’d lost a few finals last year and we really wanted to put the doubts out of our minds and drive on today.”

For TJ Ryan, it was a game his side just didn’t grab tightly enough when they were on top. Too many wides spilled in the first half when they had the wind at their backs, too many half-chances for goals snuffed out by the likes of Shane O’Neill and Mark Ellis.

“Yeah, we needed to get a few of them and we could have been more in front. But look, that’s hurling, you’re never going to dominate a match for the full 70 minutes. they went three points up and in fairness to our lads, they came back with three great points of their own before half-time to make it level going in at the break.

“At times there we dug ourselves out of trouble, we got ourselves back in the game. the game was ebbing and flowing. It was going to take something out of the ordinary to win it and it fell Cork’s way. Harnedy took his goal well and that was the difference.”