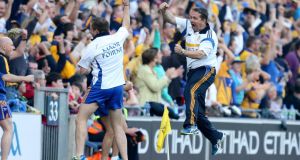 Clare 5-16 Cork 3-16: An incredible hurling season got the final curtain it deserved, Clare coming through a throttling good replay with a 5-16 to 3-16 victory over Cork at Croke Park.

A first half hat-trick from 19-year-old Shane O’Donnell gave them the platform and when it was close with 10 minutes to go they found the intestinal fortitude to stretch clear. Despite the game standing level on 60 minutes, they were the only ones that did the scoring in a breathless finale.

Breathless wasn’t the half of it. The sides resumed hostilities as if the three weeks had only been a matter of someone hitting pause and then play. The last seven minutes of the drawn game had thrown up a total of 1-6, just as the first seven did here. The difference this time around was that it was Clare who did the bulk of the scoring, finding themselves 1-4 to 0-2 up and well worth such a lead.

The goals came, of course, from O’Donnell whose day of days has begun with him not even being named in the team. A late replacement for Darach Honan, he spent the first half skittering around the Clare inside forward line and wreaking utter havoc with more or less every intervention. His first goal was smartly taken, bounced low under Anthony Nash after Pat Donnellan had made a 50-yard run right down the throat of the Cork defence.

Cork stayed in touch through points from Seamus Harnedy and Conor Lehane but it was only as a prelude to O’Donnell’s second goal. Cork were aggrieved not to have been awarded a free under the Hogan Stand around their half-forward line but once James McGrath allowed play to develop, the Cork defence was in trouble. Conor McGrath fed O’Donnell and the teenager finished with aplomb. Clare 2-5 Cork 0-4 and we’d only had 13 minutes.

All the same, it was long past time that Cork got in on the act. Another Lehane point kept them breathing and on 17 minutes Anthony Nash trotted forward for a free. Clare put 13 players on the line but they still couldn’t keep his shot out. Somehow, despite Clare having played all the hurling, there was only a goal in it.

On top of which, it meant that Clare were 3-6 to 1-6 up. And it got worse for Cork before it got better, a Tony Kelly point and a couple of Colin Ryan frees pushing them 3-9 to 1-7 up with five minutes to go to the break. If Cork were going to have any say in this replay, they were going to have to have it soon. They couldn’t go in at half-time with the game out of reach.

To their credit, the tipped and tapped their way back into it. Harnedy stuck a point, Pa Cronin knocked one over his shoulder and Patrick Horgan chipped in with two of his own. It meant that they got to the break trailing by only 1-11 to 3-9. A two-point lead was scant reward for Clare’s dominance.

Inch by inch in the second half, Cork found their way back. Horgan’s frees provided the bulk of the scores but substitute Stephen Moylan and the tireless Harnedy kept at it as well.

Five Cork points in a row meant they drew level on 53 minutes but in fairness to Clare, they didn’t blink. O’Donnell nailed a point when it was badly needed to push them ahead again and John Conlon and Colin Ryan followed up with scores of their own.

Even when Cork drew level again on the hour when Harnedy finished to the net after Conor Lehane’s shot was saved, Clare didn’t panic in the slightest. Though it looked to hand Cork all the momentum, it turned out to be their final score of the day. McGrath struck back with a goal for Clare almost immediately and O’Donnell’s last act of the night was to bring his total to 3-3.

When his replacement Honan ended proceedings with a goal that dribbled across the line deep in injury time, Clare’s fourth All-Ireland was sealed and delivered.