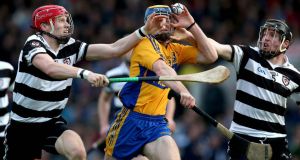 In the final set-to of an extraordinary year for the counties – yesterday’s was their seventh senior competitive hurling encounter since January – the laurels again went to Clare, as Sixmilebridge reached a first Munster final since 2002.

With that, the strange success of away teams continued in yesterday’s AIB Munster club hurling semi-final in Páirc Uí Chaoimh, as Clare champions Sixmilebridge recorded a deserved win over Midleton.

It was the 10th time in the last 12 matches not to be played at neutral venues in this championship over the past four seasons that the away club has gone home victorious.

This was an absorbing match. Midleton played in staccato bursts but could never quite take control on the scoreboard whereas Sixmilebridge always seemed able to tip the pedal and move clear when danger threatened.

On fire
With Cork senior Conor Lehane on fire in the county final, the Clare side’s plans had to contain a sensible element of containment, as winning manager John O’Meara explained.

“Conor Lehane scored 2-10 in the Cork final and there was no way we were going to let that happen again. A goal and a few scores and we’d have been happy enough. I thought Páidí (Fitzpatrick) was outstanding on him today, as was Aidan (Quilligan) on Luke O’Farrell inside.”

O’Farrell’s appearance was a surprise in that he had looked certain to be absent on holidays as late as Friday. According to Midleton manager Peter Smith, the club hadn’t exerted any pressure on the Cork forward to reconsider – leaving that to his uncles.

The early stages went well for the Bridge in that they were low scoring and Midleton didn’t get off to the feared good start. There were only two points in the first quarter: a free by Niall Gilligan for the winners, equalised by a 65 from Lehane.

The Sixmilebridge warhorse had a marvellously effective match, using his guile, touch and strength to play the role of target man to perfection. Although he ceded free-taking duties to Jamie Shanahan in the second half, he scored two of them, hit a magnificent over-the shoulder point in the first half and provided a sequence of scoring assists in the second.

His manager described his contribution as “outstanding” and reminded media that 37-year old Gilligan had also managed the club’s under-21s to this year’s county title.

Midleton at various stages looked primed to go off but the explosion never quite came. By the assessment of one reliable observer they were operating at only half the capacity that won the county title but they were also up against formidable opponents. They also recorded eight wides in the first half – compared to a solitary inaccuracy by their opponents.

The score that put daylight between the teams was Alan Mulready’s 18th-minute goal, well finished after working his way in from the right corner. Centrefielder Kevin Lynch and centre back Caimin Morey, the TG4 Man of the Match for a storming display in a tight defence, on a great buccaneering run quickly added points and Midleton now had to chase.

They rose to this challenge. Lehane was central to the recovery. In the 28th minute he went for a goal from a free but the shot was blocked. As the rebound hung in the air, he reacted quickest and leaped to bat in a goal and then pointed an injury-time free for a foul on Brian Hartnett.

With purpose
Thus reprieved the Cork side started with purpose but with the opening couple of minutes of the second half, Gilligan had set up the productive Pa Sheehan for a point and converted a free to stretch the lead.

It was typical of Midleton that their response flashed hot with Paul Haughney scoring two points within a minute, followed almost immediately with O’Farrell putting Aidan Ryan into space for the equaliser. But they couldn’t hit the front and it their opponents who quickly regained the upper hand,

Caimin Morey was well assisted at the back by captain Aidan Quilligan and Páidí Fitzpatrick, who did a focused job of marking Lehane even if the Cork attacker nearly had a second goal after a scorching run by Hartnett when a great, low, strafing shot lodged in the side netting.

The home crowd celebrated but the sight of Lehane with head in his hands told the story.

Jamie Shanahan embellished a fine display with flawless free-taking on assuming the duties and Sixmilebridge kept their opponents at arm’s length with the margin never dropping below three points.