Maurice Shanahan: ‘We are in for one hell of a battle in two weeks’

Waterford ‘need to drive on’ against Kilkenny after beating Dublin 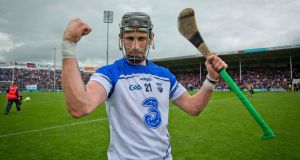 The elder Shanahan burst out of Waterford’s dressing room, bounding down the Semple corridor, in search of his cub brother.

Everyone else was accounted for.

Maurice was trapped answering a stream of questions about his 1-12, about Kilkenny, about Dan.

The 2007 hurler of the year spied Derek McGrath happily yapping away with some other journalists. Beyond the manager he eventually saw Maurice, far was less comfortable but too polite to escape.

A flick of Dan’s index finger instantly had him scampering behind. Like always.

Of course it’s different to the 1990s in Lismore. Maurice is 25 now and while he’s an inch over Dan’s 6ft 4ins he’s a smaller-looking specimen. On this evidence he’s a more consistent score gatherer and equally devastating hurler.

There was two wides off his hurley in the second half but that 66th-minute goal killed Dublin stone dead.

“That was one hell of a battle but we believe in ourselves, that’s the main thing. We, the group, the management and the players, believe.

“We had a lot of wides against Tipp, a lot of silly mistakes and Tipperary are a great team, one of the best around, themselves and Kilkenny are above everybody else and it’s up to ourselves to get up there.”

Are you close to them?

“Maurice gets a lot of criticism at times,” said Noel Connor, on crutches with a severe dead leg, “but he is a individual who loves the battle.

“Only for him at times it would be difficult to hold the ball up there as his physical presence and his overall application over the last few games has been just phenomenal. I’ve great admiration for him because it can be difficult up there on your own, but he doesn’t give out or show any negative effects.

“If anything he drives the rest of us on.”

Kilkenny in Croke Park is well known to the previous Waterford team that faltered so close to greatness.

“Ah, it’s new for most of us,” said Shanahan. “We’ll give them one hell of a battle but Kilkenny are the team up at the top. It’s up to us to get up there and challenge them.”