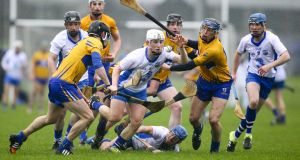 Clare and Waterford take to the field again in the Allianz Hurling League Division One final at Semple Stadium on Sunday. Photograph: Ken Sutton/Inpho.

Tactics – defined in the dictionary as “an action or strategy carefully planned to achieve a specific end – is the subject of my maiden Irish Times journey this year in this moderately transforming hurling world. Tactics are also defined in a sporting context as “a game plan made before the start of the game to play against your opponents’ weaknesses and to your own strength”.

On Sunday I expect we’ll witness a game of hurling of the 2016 tactical variety. Each season, of late, seems to bring a further change of the tactical kind to our indigenous game.

We’ve seen a few different newish strategic ploys in the last decade. We’ve seen the sweeper system used from time to time, particularly by Anthony Daly during his Clare tenure. We’ve witnessed Tipperary’s use of corner forward Noel McGrath as a third midfielder if the need arose. We’ve seen the short puck out strategy and the use of puck out signals by some goalkeepers. We’ve seen Kilkenny tactically (arguably of course) come of age in the 2006 All-Ireland final with their use of the half-forward line playing very deep and stopping Cork from playing their quick passing support game.

Then Davy Fitzgerald brought the whole tactics “thing“ to a new level in 2013 with a sweeper system that his team used as needed and altered almost seamlessly as they gained momentum moving through the qualifiers before defeating all before them on route to their All-Ireland victory.

Limerick were well aware going into that game of the many unorthodox scenarios that might arise and had planned accordingly but a combination of factors that August afternoon ensured that Clare always had the upper hand.

Last year, the very impressive Derek McGrath and his Waterford players borrowed the pages on defending, work rate and counter attacking from the latest Gaelic football play strategies and adapted it to suit the game and his group of players.

In hurling the number on the jersey is now almost irrelevant, particularly from eight up. The way they play makes huge demands on all positions. In their version, counter-attacking at pace – as in football – is one of the key components as is the demand on players to get back to defend all opposition attacks.

The puck out situation is also changing with teams satisfied to allow the opposition take possession from short puck outs.

It might be an oversimplification to say that what the managements want to create in the game is space for their forwards and a lack of it for the opposition, but that is the general aim. All the analysis and planning is geared towards not allowing the opposition to create goal-scoring chances while creating the optimum conditions for their own forward players to create and convert goal chances. Yet we don’t often see enough goals scored. In the recent league semi-finals we had a total of 82 points scored in the two games (even though we also had an over the average goal count).

On Sunday, we have the meeting of the two great tactical minds. We think we know Waterford’s modus operandi. McGrath has never made big deal of how they play and how attractive or otherwise it looks. Last season his team’s achievement of winning the league outright was impressive. They have succeeded this year in beating both Kilkenny and Tipperary (so have Clare) without changing the MO.

I (perhaps foolishly) predict Clare will pick their team to counter Waterford given the Déise’s predictability.

On the other hand, they could also go with their own system. If that is the case I would not fancy being either manager between the hours of 3.30pm and 5pm on Sunday afternoon.

I’ve always been a believer in the players having a major say in the game plans. The bigger the occasion (and crowd) the less influence the manager has. In fact, the manager can’t been heard by his players at all on these big occasions.

Given the hurling seems to be developing, the more the rugby blueprint is relevant. The players, with their on-field leaders, are the only people who can make changes and adapt to the game’s flux.

The manager really has no place, influence or need to be on the sideline looking at the game from ground level. He and his management team could just as easily be in the stand watching the game from a position of relative power.

It is obvious that McGrath’s players are comfortable with their roles and have a confidence that has been developed on the tactics board and on the training field.

Clare have two extremely obsessive hurling mentors on their sideline. Their team won’t be short of instruction, enthusiasm or understanding of their part in the greater scheme of hurling things that relate to Sunday’s game. But the best laid plans, and all that.

Waterford certainly have the players to win. They are, I think, a better side this year than last. Patrick Curran, Shane Bennett and a returning Pádraig Mahony give them a panel strength that is necessary to win against the best teams.

Clare have also got strength in depth and also have had the more testing run in. They have a returning Tony Kelly and Podge Collins. They scored two fortunate enough goals in the semi-final which might over gloss that result. That said their work rate and overall performance was very impressive. They have momentum, even without John Conlon. They might win this first tactical contest and set the tone for the sequel in five weeks’ time.

Heartbreak for Tuohy and O’Connor as Tigers down Cats 13:14
McIlroy well off pace as Thomas leads low-scoring Zozo 10:24
Seán O’Brien: Anger over my parents’ break-up never left me 09:30
Touching response to Marcus Rashford’s clarion call reveals very best of England 07:00
Michael Walker: Is De Gea an answer again amid questions at United? 06:00
Crossword Get access to over 6,000 interactive crosswords