Can the champions build on Sunday’s display of belief, power, skill and sublime finishing? 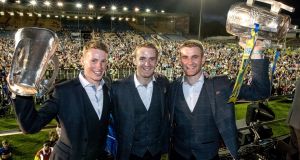 It was the Sunday the boys in the blue and gold took over Croke Park and history was again made. It was Tipperary’s day. It was a special occasion for the McGrath family with Brian captaining the minor champions and Noel and John winning senior medals. It was the day Tipperary put a halt to Kilkenny’s latest attempt at a three-in-a-row.

So where are we now? Or maybe the question should be, where are Tipperary now and can they build on Sunday’s display of belief, power, skill and finishing?

With the Liam MacCarthy Cup nearby, Kilkenny’s bid for immortality foiled and a buzz around Thurles that was tangible, there couldn’t have been a better environment to be a young Tipperary hurler.

Thousands of children streamed on to the field to meet the Mahers – Pádraic, Brendan and Bonner – and Michael Cahill and Noel McGrath, all of whom had been a central part of the previous Sunday’s drama. The future looked bright. It seemed like the first half of the decade would belong to the Premier. Themselves and Kilkenny dictated otherwise.

The second half of the decade is beginning equally as bright. History,though, indicates that they have only been able to win two titles in a row on three occasions since 1900, the last time being in 1961/62.

Is it going to be any different in 2017? What is there to indicate that they will win again next year? Well, the average age of the team is a good place to begin. Goalkeeper Darren Gleeson, at 35, is by far the oldest in their squad. They have, arguably, the most skilful players in hurling. They have the confidence earned this year. They have played in three of the last five minor finals, winning two.

They also have enough of the 2010 panel still in their ranks to guide them through the celebration season without losing the perspective that they possibly lost the last time.

The term ‘keeping their feet on the ground’ has been used by both players and management since the final. Yes, they deserve to enjoy the down-time but they also need to keep in mind that they are role models, that they have a new status in their communities, and in the wider hurling and sporting community. With that honour comes responsibility.

The lessons of 2010 should help guide them through to begin the next chapter in Tipperary’s hurling story. But will it?

What other counties realistically have a serious chance of being contenders next year? Obviously we can’t write off Kilkenny, even though they might have a few retirements.

Michael Fennelly, in the form he showed over the last few years, will be a big help to their cause. But while we wouldn’t dare to disregard the Cats, they probably won’t be the force they once were.

They have set the standard for hurling in the 21st century. They have been champions both on and off the field. As players and role models, they always carry themselves with pride, grace and dignity. This is not an obituary, just an acknowledgment of the greatness Kilkenny hurlers achieved under Brian Cody and his various management teams. They might be vulnerable next year, though.

The other serious (to use a word from the Cody lexicon) contenders, Galway and Waterford, perhaps believe it could have been them climbing the Hogan Stand steps last Sunday with the margins of their semi-final losses being so small.

But it wasn’t them and they have got to start again with no guarantees.

A win for Waterford’s under-21s tomorrow evening would do much for the county and the hurling population within. Derek McGrath, Dan Shanahan and Fintan O’Connor staying involved is crucial, as is the involvement of elder statesman Brick Walsh.

Galway, in their semi-final, were equal to Tipperary in most facets of the play except on the scoreboard. They undoubtedly have the potential – but then how often have we said that since 1988?

Of the others, Clare have the player- base to be in the final four. They need to come up with a better formula though to play to their undoubted strengths.

But for now it’s Tipperary’s well deserved autumn of content and a future that looks bright again.