Cody gets 110 per cent out of players and has done it consistently . . . he is the Boss! 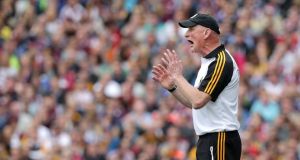 We’ve been here before, singing Kilkenny’s praises, and it looks like we’ll be here again. There is no end to what Brian Cody’s men achieve on the hurling pitch, and if there were moments in the first half when it looked as if Galway were up and able for this latest test, the truth of the matter is that you can win some of the skirmishes but you’re unlikely to win the war, not when Kilkenny are the opposition.

One moment in the second half summed up what Kilkenny are all about. Cathal Mannion had possession and he was bottled up by a gang of players in the general area of Kilkenny’s half-back line. One of those players doing the hard graft was Eoin Larkin, far removed from his own corner-forward position.

When the referee blew the whistle on Mannion for over-carrying, Larkin celebrated more than he’d done for the TJ Reid goal. That, to me, typified what Kilkenny are about.

In terms of physicality, there is no bigger and stronger team than Galway in hurling at the moment. And, at the end of the day, they were outmuscled in the second half by Kilkenny.

Some of that outmuscling is due to Kilkenny’s sheer determination, but they practice rucking – it is like a rugby term, combat for the ball on the ground – and these rucks have become really important in hurling. The teams that win those rucks are winning the games. You have got to go in there where it hurts and fight for the ball and there is no team now doing that as well as Kilkenny and that’s down to practice.

Kilkenny are playing at that intensity all the time and if you want to beat them you have got to take them on and there is no team out there able to do it.

But they missed a couple of critical chances at that stage – Aidan Harte had a bad wide, David Burke had a bad wide – and to beat Kilkenny they needed to be further in front at half-time than three points.

Only Conor Whelan managed to get anything, but Canning was never involved and Flynn was substituted.

Kilkenny dominated the second-half and much of it was typical of what we have seen from them down the years. Just after Whelan had got that point after the HawkEye decision and seemed to get the momentum back for Galway, the ball was pucked out unscientifically down the middle by Eoin Murphy and TJ Reid – who must be the hurler of the year – picked it up and won a free and put it over the bar. Kilkenny were straightaway back on track and that typifies Kilkenny.

You can have all the tactics in the world but if you have players that can win their own ball and, when they don’t have it, can turn the opposition defenders back towards their own goal with sustained body tackling and hooking and blocking, that’s really what hurling is all about.

If anything you could argue Kilkenny were as comfortable, if not more comfortable, than they were in the Leinster final.

There were a couple of examples of how Kilkenny’s and Galway’s stages of development differ. Just after half-time John Hanbury brilliantly dispossessed Colin Fennelly, but then cleared the ball over the sideline and celebrated by urging on the Galway supporters behind the goal. Why celebrate like that?

In contrast, Paul Murphy won a ball and put it across to Colin Fennelly who pointed.

Galway have to learn that winning the battle should be routine; it is how to win the war that ultimately matters.

You have to hand it to Cody too, he really is the Boss. It’s a big call to take off the hurler of the year (of 2014) but he took off Richie Hogan and put on Richie Power, a player who hasn’t played any inter-county hurling since the All-Ireland final last year. The pity is that we don’t see Richie Power more often because his knee is so bad. What a brilliant player he is in a succession of great Kilkenny players. He caught a fantastic ball when he came on and had the vision to find Michael Fennelly for one of those coffin-nailing points.

Cody’s record speaks for itself, 11 All-Irelands. It seems a lifetime ago that he took over the Kilkenny team but his team’s desire for battle has never waned. They blocked and hooked and worked and put their bodies on the line, which is just incredible given the number of battles and hard wars they’ve been through and the general Cody has been through those wars.

He gets 110 per cent out of the players and he has done it consistently. Who is to say they won’t win it again next year?

He is the Boss!

1 Six Nations: Ireland are contenders but England still the team to beat
2 Owen Doyle: Creeping professionalism of schools rugby a threat to the game
3 Mike Catt hopes to have Irish backs purring in Six Nations
4 In Donegal Michael Murphy is seen, simply, as a godsend
5 Nick Kyrgios sets up Rafael Nadal showdown after five-set thriller
Real news has value SUBSCRIBE