Beaten but unbowed: ‘I thought we had it this year, I thought this would be our year. It’s just a pity’ 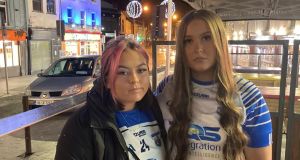 Leah O’Brien and Jade Coady were among the disappointed after the match. Photograph: Eoghan Dalton

It didn’t help that the weather was cold.

There wasn’t much of an atmosphere to be had, with a collection of gardaí the largest group to be seen on the city’s roofed street. “The atmosphere kinda died in the end because everyone was so sad,” says Nicole Power, from Kilmacthomas. “It was depressing.”

Fresh from watching Waterford hurlers fail to end their six-decade wait for an All-Ireland Leah O’Brien noted plaintively, “I thought we had it this year, I thought this would be our year. It’s just a pity.”

“It doesn’t help with the cold,” she adds.

Standing beneath the steel and glass canopy in Waterford city’s Apple Market, many people hoping for some revelry left the surrounding pubs following the full-time whistle. Some stayed on but most went home.

There were gasps during the first half – too many. Waterford spurned a number of goal chances, bringing agony to players and followers alike. But it became clear in the second half that it wasn’t to be.

Gavin Daniels came into town to watch the match at Revolution Bar. “[I’m] absolutely gutted. I feel like the game plan went out the window and everything just seemed to slip away.”

Limerick’s Nicky Quaid was one name constantly mentioned. The goalkeeper repeatedly prevented the Déise from finding a way through and is now “nailed on for an All-Star”, according to Daniels.

They would have all loved to be celebrating in the Apple Market, had the game went their way. Three years ago, before public health restrictions, the area was converted for an open-air screening of Waterford’s march to the 2017 final, drawing hundreds. They eventually lost out to Galway but it was still a proud time for the county.

For die hard fan Deckie White, who reckons he’d barely missed a game in more than a decade, before Covid-19, there would have been nothing better than getting to see the game in person: “I’d love to be sitting out in Croke Park freezing . . . but I’d love it, to be in that atmosphere.”

Despite the 11-point loss, supporters look at it as another “memorable and proud” time for Waterford hurling.

Next year isn’t far away either, notes Daniels. “You can’t beat being there and hopefully we can be there next year.”

The city and county council has agreed to award the team €15,000.

“They have given us a lift in the last number of months to be fair,” says Ardmore Cllr Tom Cronin, himself one of the last Waterford men to achieve All-Ireland final glory in Croke Park, having brought his parish’s hurlers to the promised land in 2018.

“It would be only right for us to give them that support. They deserve it, they have done their job to a tee when it comes to wearing the jersey.”

This time was a far cry from a typical summer’s All-Ireland. But there was plenty of goodwill to be found. Felicity Tubritt sums it up: “You know what? I still loves me county.”