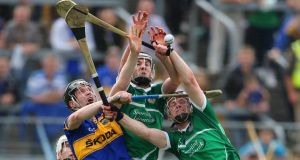 They had spent the early part of the league stung by criticism from within their own county, losing three of their first four league games. They had turned that around, very nearly winning the league final only to lose in extra-time to Kilkenny, so they’d already shown this year that criticism was not necessarily a millstone around their necks.

Nevertheless Keatings’ comments seemed to cause a huge uproar. On TV, the debate suddenly became – “are Tipperary soft?” He even appeared on-screen as the game was about to start.

Whatever Keating had said, he had touched a chord. By the time throw-in came around, Tipperary (the 3/10 favourites) had a point to prove and a question to answer.

That they could not was down in large part to the brilliance of Limerick’s hurling, and to ascribe the victory to anything other than that would be extremely foolish.

But the position that ‘Babs’ holds in the Tipperary consciousness is still hugely influential. He came back as manager in the middle of the last decade and was entirely incapable of getting anything out of his players . . . he was essentially seen as a man out of time.

It wasn’t just that he was unsuccessful; there was also almost a wilful refusal to admit the game had moved on since he had been so successful in the late 80s and early 90s.

But it seemed that none of that counted for anything. He had questioned their manliness, and they had to respond. It’s in situations like this that the GAA world seems very parochial indeed.

Was Babs proven right? Tipp lost the game late on, conceding 1-2 in the last three minutes, so maybe he was, and whatever the Tipperary players might think of him personally, they’ll have to wear that one. They weren’t the only ones outraged before the game began, however.

Limerick were feeling disrespected too. Paul Browne had this to say after the game – “We had heard all that stuff and to be honest we were disgusted with it ourselves. We just wanted to prove to everyone, to the hurling nation, that we’re not going away. A huge driving factor today was the media and what’s been said and the disrespect that’s been shown to us.”

If he’s referring to media speculation surrounding the departure of their co-manager, then I’m struggling somewhat to understand where he’s coming from.

It’s hardly disrespectful to say that the loss of the man who brought about real and sustainable improvements in the team in his time in charge would affect their preparations in some way.

It’s a little like saying that counting a team’s wides, and then having the temerity to print that figure, is in some way disrespectful. You lost the senior half of your management team! We’re going to presume that has had an impact. Tipp lost – Babs was right. Limerick won – the meeja don’t have a clue. Something tells me the truth lies somewhere in between.

Given the advances in Gaelic Games team preparation in the last 15 years, I always find it outrageous that more often than not, post-match interviews with players or managers will contain some reference, veiled or not-so-veiled, to a criticism levelled at them from anyone from a local newspaperman to The Sunday Game.

I find the obsession with The Sunday Game the strangest of all – Jim McGuinness giving RTÉ both barrels in 2011 over the incorrect protocol for awarding an Ulster quarter-final Man-of-the-Match award being a particular favourite of the genre.

‘So they said it was a poor game, they said it was hard to pick a deserving winner of an irregular-shaped piece of crystal… WHO CARES??!!’ The programme is an institution, it’s an extremely popular TV show, but it is, after all, just a TV show.”

If you’re relying on outside influences, whether that’s on TV or in print, to fuel the furnace for what could be your only game in your provincial championship, a game you’ve had eight months to look forward to, then it would appear to be a rather strange way of going about your business.

Maybe it’s not so old-school though – instead of notes stuck on the dressing-room door, inter-county teams could have a Pinterest page set up for this very purpose? A Facebook group? They would never read the newspapers of course, but in the interests of team morale…