Cork's attacking verve but with Galway you’re in the dark 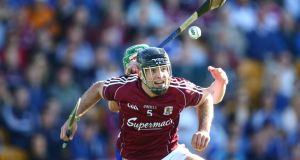 The day of deliverance – or otherwise – arrives on Sunday for the last candidates in a hurling summer still trying to discover what it is about. Recent championships have been aflame with superlatives anointing them as the greatest ever and this year’s version came with rave advance notices. It hasn’t happened. Kilkenny and Tipperary have kept up their part of the bargain by confirming that they are, once again, the big two. A double bill in Thurles will reveal their August opposition.

Waterford, who have provided most of the buzz of the hurling year, will hope to build on their league success by taking Dublin’s scalp when the team’s meet at 2pm.

Galway and Cork have the main billing at 4pm. Both counties can at once feel heartened and haunted by coming within a hair’s breadth of an unexpected All-Ireland in recent years, and if there is to be a challenge to the big two it is likely to emerge from this pairing.

As Anthony Cunningham anticipated playing Cork in this year’s league, he jokingly said there may not be much point in showing up given the scores which Jimmy Barry Murphy’s team were posting in the early part of the year. Now that both counties have reached the critical point of their season, that concern remains for Galway.

After stuttering in the league and championship against Waterford, Cork have begun to recover some of that attacking verve. The 20 wides they registered in knocking Clare out of the All-Ireland were a concern but they occurred on a dismal evening and paired with the 0-20 which the team registered, they are creating scoring chances at a serious rate.

Patrick Horgan remains the focus of the attack, and the need to put the shimmering talents of Conor Lehane to more consistent use remains a pressing concern for the Rebels.

The return to fitness of David Collins is heartening for Galway as his influence in the team’s defence extends far beyond his position. Organising his defence to limit the space afforded to Seamus Harnedy and Pa Cronin to exploit is a key task for Cunningham.

Nobody is quite sure what Galway will produce in these knockout games. Joe Canning’s delightful hammer blow of a goal against Kilkenny was another reminder of the fact that that Galway have a contemporary genius. But too much of his career has been curtailed by quarter-final exits.The team has lost 11 of their last 13 encounters in the last eight.

Cyril Donnellan has brought energy and a ferocious work rate to the attack, and in Cathal Mannion and Jason Flynn operating in Canning’s vicinity, Galway have the potential to hurt teams with goals.

JBM’s team kept clean sheets against Wexford and Clare and implemented a specific and successful man-marking job on Tony Kelly. If Cork double up on Canning, the obligation falls on Galway’s younger forward stars to exploit that space and Jonathan Glynn has proven himself an able ball winner if Canning needs to vacate the edge of the square.

This is a very physically imposing Galway team but they have lost a wealth of experience since their near burst for glory in 2012. Maroon fans will expect to see a tidier touch from the Galway collective than in the Leinster final and an avoidance of the sort of total collapse which they suffered against Tipperary last year.

Cork will achieve a certain level of performance whereas Galway bring their crowd to Semple Stadium in the dark as to what they can expect. They have the hurling within them: showing it has too often been their problem. With Galway it is always just a hunch that they are due a good day. Sunday could be one of those.