Royal County will take plenty away from Omagh despite Championship exit 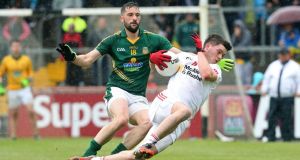 Richie Donnelly of Tyrone is well marked by Michael Newman of Meath during the All-Ireland SFC Round 2B Qualifier at Healy Park in Omagh. Photograph: Andrew Paton/Inpho/Presseye

Three summers into Seán Boylan’s 23 year stewardship of Meath football Laois beat them by 10 points. Boylan looked a spent force until six men - Mick Lyons, Pádraig Lyons, Liam Hayes, Gerry McEntee, Joe Cassells and Colm O’Rourke – knocked to his mother’s door to not only insist he stay but that he “put his shyness in his arse pocket.”

The herbalist delivered four All-Ireland titles. That was done with some of the most regal and certainly ruthless footballers the game has ever seen.

Mick O’Dowd, the equally mild mannered incumbent, was leaning against a wall in Omagh’s Healy Park on Saturday evening facing the inevitable query about his future after three years and questionable progress.

“The clubs in Meath will decide that,” O’Dowd said of the GAA’s notoriously fickle system to anoint and behead inter-county managers.

“I personally wouldn’t step away from this group”

Of course, it’s never that simple: “I’ve three young kids and work for Bank of Ireland. You know, I wouldn’t like to walk away from them, put it that way, because in the past instability has hampered Meath’s progress but, as I say, it’s up to the clubs to decide that.”

In basic terms the three year plan was to make Meath a top eight team again.

“We haven’t achieved it. I think that’s an achievable goal,” O’Dowd states matter-of-factly. 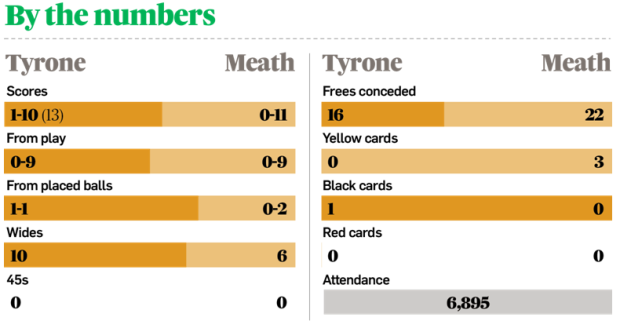 “This Meath team is doing all it can, in the context of having its’ most influential players sitting on the bench for the last two seasons. I don’t think people who are so quick to criticise the team, actually understand that. If they looked at any other county and took their most influential player out of their team...but that’s what Conor Gillespie is for us.”

But that’s a different plain to Meath football right now.

Tyrone deserve to progress because they weathered Meath’s best efforts and Peter Harte buried a 53rd minute penalty after Donal Keogan was adjudged to have fouled the advancing Tiernan McCann.

There, finally, began a brilliant game of football. All vestiges of fear dissolved as Meath, scoreless for the opening 28 minutes, came close to perfection when faced by expulsion from the 2015 championship.

Keogan, their heroic captain, was one of the men who stood tall in the face of marginally superior opposition.

“Micko has a plan and everything is working towards it,” he said. “We are maturing as a team and it is a young team. It’s going to take time, there are lads there who are only 19, 20. That today will stand to them. They will progress mentally with that in their kit bag. The Westmeath defeat and this defeat will make them better players. Hopefully.”

So the clubs should back O’Dowd? “Oh yeah, I think so. I’d be backing Micko after the effort he has after putting in for the last three years. Himself, Sean (Kelly) and Trevor (Giles) and even Colm Brady. They need more time. It is a building process and they are building in the right way.”

Tyrone are not the bearded men who tramped through the 2008 qualifier path all the way to an All-Ireland but some sages remain. They are also under-21 All-Ireland champions.

“We are still in this championship but I don’t think anyone will be shaking in their boots if they were watching our performance,” said Mickey Harte. “So, we have to do a lot more to be considered better than many people perceive us to be right now.”