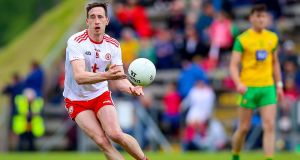 Tyrone midfielder Colm Cavanagh has announced his retirement from intercounty football, cutting the last link with the All-Ireland winning team of 2008.

Following a career with the Red Hands spanning 14 years, the Moy man said he has had some of the best days of his life wearing the Tyrone jersey.

In a statement released on Twitter and headlined ‘Thank you and goodbye’, Cavanagh said that 2020 has taught us a lot, and for him it “has confirmed that your health is indeed your wealth, and with that it is time for me to step back and pass my Tyrone jersey on to the next in line”.

Cavanagh had spoken at the end of last season of having to make a big decision over whether to give it one last year, and opted to return for the 2020 season, but has now decided not to rejoin the panel for the resumption of a campaign disrupted by the Covid-19 crisis.

“I am very proud and honoured to have worn the Tyrone jersey for as long as I have, and have had some of the best days of my life whilst wearing it.

“I wish the current and future teams the very best of luck in the seasons ahead, and I have no doubt they will be raising silverware together for many years to come.

“I will always value the friendships I have made along the way and no I look forward to supporting and encouraging my children if they decided to become involved in GAA sports in the future.”

He had special words of gratitude for the fans who have followed the county team through good times and bad throughout his career.

“The biggest thank you has to go to the people of Tyrone and all supporters of Tyrone GAA.

“Your support and encouragement has kept us going through some of the toughest times as a county, and for that I am forever grateful. Thanks for everything.”