Early injury to Jack McCaffrey only setback in win over UL 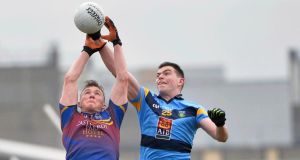 UCD breezed through to their first Sigerson Cup final in 13 years after blitzing UL with four goals in the first semi-finals in Belfast on Friday.

Kildare’s Niall Kelly hit the net twice, with a star-studded UCD opening up with 2-5 without reply before losing Jack McCaffrey in the 15th minute.

The 2015 Player of the Year walked off with an ice-pack strapped to his right leg, which might have had alarm bells ringing in the capital, but it looked like a precautionary measure.

The game was already over as a contest, with the management team of John Divilly, Brian Mullins and Seán Boylan well aware of a much tougher test to come against DCU in Saturday’s final.

UCD ripped through disappointing UL, Tipperary’s Liam Casey scoring a second minute goal before Laois’ Eoin Lowry ran through a porous Limerick defence to drill a rocket across the goalkeeper after 13 minutes.

Paul Mannion hit two points from play, before being rested early in the second half and Westmeath star John Heslin nailed four frees in the first half for UCD.

Aidan Rowan got UL on the board with an 18th-minute point but it was temporary respite.

Kelly drilled home the first of his two goals in the 20th minute, after an unselfish pass from Heslin, to help UCD lead by 3-9 to 0-2 at the break.

They had the wind after the break, and with UCD running their bench and no intensity in the game, they were at least able to make a better fist of things after the break.

They chipped over a few points through Rory Deane and Kevin Moore before Niall Kelly grabbed his second goal, after intercepting a poor pass to the UL goalkeeper, in the 48th minute.

Galway’s Ian Burke scored UL’s only goal in the 54th minute with a low left-footed finish and then missed an injury-time penalty.