September Road: What Monaghan can learn from Tyrone 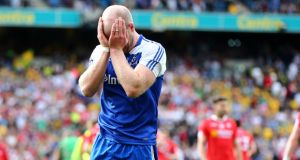 A dejected Dick Clerkin of Monaghan after the game against Tyrone. Photograph: Cathal Noonan/Inpho

How bitterly disappointing for Monaghan – Ulster champions yet their season is ultimately ended by an Ulster team.

After the joy that followed the win in Clones, could that buzz have anti-climaxed any more than it did on Saturday?

Seeing teams emerging from the qualifiers to slay their respective provincial king pins in the All-Ireland series has been a regular occurrence in the hurling championship of late and it’s not entirely unusual in the latter stages of the football championship either. But does a result such as this put a further dent into the reputation of the provincial tournaments considering this was just the quarter-final stage? Think Cork/Kerry down the years in the semi-finals. Armagh and Tyrone is the other obvious example – that was bad enough but it just doesn’t happen in quarter finals.

Of the last 20 provincial winners in the senior football championship only two have lost their quarter-final games – and guess who they are?

Yes Monaghan are the only side of those provincial champions to go on and lose a quarter final. And they’ve done it twice now. Worse still they’ve lost to Ulster opposition both times – both times against Tyrone. No doubt the draw has been hard on them, Tyrone twice and Dublin in the last three summers, but perhaps Monaghan are putting too much of an emphasis on their Ulster campaign?

Ultimately the big teams arrive in the knockout rounds and, of four Ulster teams in the last eight, now only Tyrone survive. What does that tell us?

Surely if you were to piece together your ultimate footballer, the final product wouldn’t be too far off an Aidan O’Shea (inset) or Michael Murphy.

Last Saturday we got to see two of the finest players of their generations take the field, in the latest chapter of an unspoken rivalry.

Is it any surprise that given the size, strength, mobility and footballing skill of the two that both players were on the radar of every college in the country as highly talented county minors, Murphy choose DCU though, as O’Shea opted, or had to settle, for city rivals DIT. Either way there was bad blood from the start, both were set on out-doing the other.

Incredibly as established senior intercounty footballers they led out their fresher teams against one another in 2010, one game between the colleges attracted the attention of AFL scouts, such was the level of their performances. O’Shea would end that year with the All-Ireland, although Murphy would respond with Sigerson glory a year later beating DIT along the way. His Mayo counterpart would soon equal that feat in 2013. Nestled between those was the small matter of a senior intercounty All-Ireland for which Murphy was the hero.

No doubt they’ve set the benchmark for one another – the question now is can O’Shea continue to follow the script.