Roscommon make it three-in-a-row with win over Down 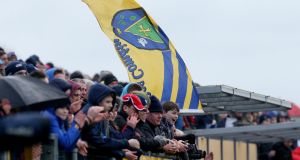 Roscommon fans celebrate a score from their team in their win over Down in the Allianz Football League Division One clash at Pearse Park. Photo: Ryan Byrne/Inpho

So much for Roscommon’s slow submission into relegation. Not even the wild uncertainty of sport is likely to topple their division one status after this latest win, their third on the trot and seemingly getting easier all the time.

If Roscommon hadn’t taken their eye off the ball late on against Monaghan in round one they’d be sitting shotgun beside Dublin: instead they’re sitting comfortably in the back seat, beside Donegal, leaving Kerry, Monaghan, Mayo and the still pointless Cork and Down somewhere in the rear view mirror.

It doesn’t seem to matter where they play either - this possibly being the first league meeting of Connacht and Ulster opposition played on Leinster grounds: the unavailability of any playable or suitable Roscommon venue may have mildly upset their preparations but not the performance, the only surprise in the end being Roscommon didn’t win by more.

Down - ripped apart by Kerry last week - raised a little more spirit but no great temper, most of their shooting of the quality normally seen two or even three divisions below. Manager Eammon Burns did promise to “keep battling on” but surely now their war against relegation is already lost.

Joint Roscommon managers Fergal O’Donnell and Kevin McStay have been rotating their post-match duties, and this time it was O’Donnell’s turn: with 6-60 from their opening four games it’s getting harder to disguise the sense of satisfaction, that life in division may not be so daunting after all.

“Well if you said back in November we’d end up with six points from all our games then you’d certainly take it, and hope for the best,” said O’Donnell. “But we have to be realistic. We still have three tough games to come and it’s going to be tough to pick up points in any of those.

“But at the same time there’s no point in me saying we’re not happy. We are happy. This was the game that a lot of people at the start of the league said would be the relegation battle, both of us coming up from division two. And it might still turn out that way.

“It was also an unusual position for us to be going in as favourites, everyone expecting us to win. In our other games it was opposite. That can be difficult for Roscommon, who have sometimes struggled when we are favourites, like against Sligo last year. So again I’d be happy with the overall performance, especially the way we picked it up again in the second half.”

Indeed Roscommon did finish even stronger than they started, team captain Ciaran Murtagh calmly converting a 69th-minute penalty to bring his tally for the afternoon to 1-6, including four frees. Down goalkeeper Michael Cunningham had illegally held Fintan Cregg in the previous attack (Cunningham black-carded for the offence), but Roscommon had threatened a goal on several earlier occasions (Cunningham himself making a key block on one of them).

Cregg was proving a magnet for possession when drifting around midfield, and chipped in with three scores of his own, including one free. Ian Kilbride was equally deft alongside him, while Cian Connolly and Cathal Cregg also knocked over a point each from the two corner forward positions.

Down weren’t helped by the absence of their captain Kevin McKernan, who justifiably cried off having been up all night to witness the birth of his first child. They actually hit the first two points, through wing back Darragh O’Hanlon and Conor Harrison, then went 26 minutes without a score - surrounding the game with dense air of inevitability.

Roscommon were a little wasteful of possession at times, and also lost Senan Kilbride to a black card midway through the second half. Not that Down could take advantage, hitting some pathetic ball into vacant space on more than more occasion.

The only possible criticism of Roscommon is the fear they may be covering the ground too easily for this time of year - or peaking too soon, as distance runners say: “Someone did sat to me on Saturday that it’s more important to be going well in July,” noted O’Donnell, “but I keep saying the most important thing for us this year is to stay in division one. If we do that then it doesn’t matter what happens in the championship.

“I actually felt we were a little lethargic at times, but we have worked hard over the last few weeks. We’ve Donegal next weekend, up in Ballybofey, but that’s what we want, to be played against teams that have All-Ireland medals. You’re learning all the time.

“So I don’t think it was our best game this year, and we did miss a few goal chances, but we look at the scoreboard and see we only conceded six points, and I don’t think coughed up many other chances either, then that’s always satisfying. Neil Collins did very well at full back, and that certainly contributed.”

For Down, who added just two points in the second half, All-Ireland champions are up next, in Newry next Saturday night: “Obviously they haven’t been on our mind before now,” suggested Burns, with muted acceptance, “but it’s another challenge. We’ll keep battling on, gather the troops again, and see how we are for that.”