Queen’s and Sligo IT expelled from Sigerson Cup 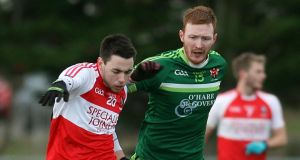 Ciarán O’Hanlon (right) is one of the three Queen’s University players deemed ineligible to play in the Sigerson Cup. Photograph: Inpho.

Controversy has broken out in the Sigerson Cup with the decision of the GAA’s third-level governing body, the Higher Education Authority (HEA), to expel both Sligo IT and Queen’s University Belfast from this year’s competition.

The decision was handed down after a hearing on Wednesday night at which Queen’s had challenged their defeat by Sligo IT in last month’s Sigerson Cup.

These sanctions were handed down on the basis of the both teams having fielded ineligible players in the match. Sligo IT’s Stephen Doak was deemed not to be a full-time student as he is a sabbatical officer in the institute’s student union.

When the result was overturned, however, the HEA also ruled that Queen’s had fielded three players from Stranmillis University College: Ciarán O’Hanlon, Tony Donnelly and Greg McCabe.

Queen’s dispute this finding, as they argue Stranmillis is a constituent college of QUB and that students there are entitled to represent the university and that further one of the requirements to represent a college is to hold a validly issued student card and that all Stranmillis students carry cards issued by Queen’s.

It is also argued that when a similar situation arose three years ago, the HEA lost the verdict when a proposed suspension was challenged in front of Croke Park’s Central Appeals Committee.

There has been no formal notice of appeal from Wednesday night’s hearing although it is believed that Queen’s are likely to challenge the punishment in order to clarify the situation regarding Stranmillis students. To that extent Sligo IT have become collateral damage although the rule on sabbatical officers has been breached.

It has been pointed out in support of the HEA that St Patrick’s Mater Dei Institute in Dublin is a constituent college of DCU but competes in higher-level tournaments under its own banner.

Sligo and Queen’s have until Saturday to decide if they want to appeal.