‘Down are coming down here, they will have nothing to lose. We need two points again’ 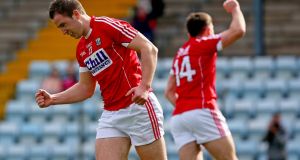 Colm O’Neill was in fine form for Cork on Sunday. Photograph: Inpho

Three losses in their previous three games had left Cork under pressure, but an increase in intensity helped them to have seven point to spare on Monaghan at Páirc Uí Rinn.

Leading by 10 at one stage in the first half, the hosts were six in front by half-time and stayed focused to ensure that there was no complacency after the break. For manager Peadar Healy, it was important to look ahead rather than back.

“Two weeks’ time is another big championship match for us. Down are coming down here, they will have nothing to lose. We need two points again if we want to survive in Division One.”

While he wasn’t proclaiming it exuberantly, there was an improvement here, on the 18-point Roscommon loss and four-point defeat to Dublin last week. As against the All-Ireland champions, Cork got off to a roaring start, scoring an unanswered 1-5.

Colm O’Neill had the goal for the home side on seven minutes, a low finish to the corner from Peter Kelleher’s lay-off after Paul Kerrigan’s delivery, and he had a couple of points too.

While Conor McManus got Monaghan off the mark in the 11th minute, they remained on the back foot as Cork continued to flow, Mark Collins’ point making it 1-10 to 0-3 on 29. From nothing, though, Monaghan got back in the game.

When Ryan Wylie was fouled, McManus showed quick thinking with the free as he passed to the unmarked Conor McCarthy, who found the net. Darren Hughes added a point before two boomers by McManus and there were just four between the teams.

Cork didn’t look like wavering, however. Collins and Colm O’Neill ensured that they led by six, 1-12 to 1-6, at half-time and they scored four of the first five points in the second half, with Colm O’Driscoll, O’Neill (two) and Kevin O’Driscoll all on target and McManus having Monaghan’s only response.

With no goal chances, Monaghan didn’t look like eating into the Cork advantage, with Kevin Crowley and subs Dan Mac Eoin and Daniel Goulding all registering late points for the hosts. Even though they finished with 14 men as Kevin O’Driscoll was black-carded at the death - following his brother, Brian - Cork were comfortable at the end.

Monaghan boss Malachy O’Rourke cited Cork’s good end to the first half and start to the second half as being key.

“When we got back to four points, especially with the start we had and the wind to come in the second half, it was a manageable scoreline,” he said.

“Cork’s couple of points before half-time made a bit of a difference and they started the second half well, we never could get into a position where we were testing the lead, they always had that bit of distance and that’s the way it panned out.”

1 Ireland boss Stephen Kenny: ‘I’ll do things my own way. Put it that way’
2 Andrew Conway diary: Nailing the wheelie bin challenge on the double
3 Masters Meltdowns: How even Major winners wilt under Augusta’s intense spotlight
4 Damian Browne: To the ends of the Earth in search of the ‘savage warrior spirit’
5 Welcome to my world: Brendan Boyce walks on as everyone else joins in
Real news has value SUBSCRIBE

Ireland boss Stephen Kenny: ‘I’ll do things my own way. Put it that way’ 06:00
Mickey Graham calls for some clarity from GAA on championship plans 06:00
Welcome to my world: Brendan Boyce walks on as everyone else joins in 06:00
Masters Meltdowns: How even Major winners wilt under Augusta’s intense spotlight 06:00
Whole new ball game: Hats, scarves, facemasks - An Ulster final like no other 06:00
Crossword Get access to over 6,000 interactive crosswords