Midfield drives Carlow on their way past Wicklow 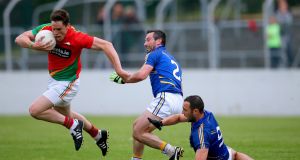 Carlow’s Brendan Murphy is challenged by Wicklow’s Ciaran Hyland during the All-Ireland SFC Round 1A Qualifier at Netwatch Cullen Park in Carlow. Photograph: Tommy Dickson/Inpho

Carlow are in the draw for Round 2 of the All-Ireland SFC Qualifiers after they led neighbours Wicklow from start to finish of this strongly contested 1A encounter before an attendance of 2,000 at Netwatch Cullen Park on Saturday evening.

The basis of this win was laid in midfield where Seán Gannon and Brendan Murphy inspired the home side to victory over a Wicklow side which went into this local derby as favourites.

Gannon claimed man of the match status with a wonderful overall display of fielding, running himself into the ground in his county’s cause, while Murphy hit an outstanding 1-4 from play.

A great start from Carlow provided them with early momentum and, although Wicklow twice hauled the home lead back to a three-point margin during the course of the game, they were never able to contain the Gannon/Murphy midfield axis.

Carlow stormed into a 1-4 to 0-1 lead after 13 minutes, playing enterprising football in opening up that advantage, which left Wicklow chasing the game from the start.

The Carlow goal in the fifth minute was crafted by Gannon and Murphy combining splendidly for the big Rathvilly clubman to shoot to the Wicklow net. Slowly Wicklow gained momentum with corner back Aaron Murphy, centre back Dean Healy and full forward Paul Cunningham leading the comeback.

Cunningham was their target man in attack, providing problems all through for the Carlow defence and contributing a handsome 1-6. The Bray Emmets clubman’s 33rd minute goal cut the Carlow lead to three points (1-7 to 1-4) but Carlow always found a way to respond with a score and at the break led 1-9 to 1-5. And their midfield was backed up by fine displays from defenders Benny Kavanagh and John Murphy.

Carlow hit the opening two points of the second half from full forward Darragh Foley, who finished with a total of 0-8. Darren Hayden replied with a brace of Wicklow points from play but the visitors could not make any further scoring inroads against a hugely committed Carlow side.

The home county maintained control for most of the second half, despite having had centre forward Darragh O’Brien black carded on 15 minutes and losing Brendan Murphy to another black card with five minutes left.

Carlow, who were completing a league/championship double over the Garden County, sealed victory with a fine late 40-metre free from full back Daniel St Ledger, who scored 0-3 from long-range frees.

This was the 24th SFC head-to-head between these counties, going back to 1918, with Carlow leading 16-6 – there have been two draws.