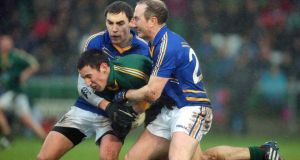 MEATH 4-11 WICKLOW 2-5: On the scenic route into Baltinglass, over the Wicklow Gap, the wind was howling and the rain outrageous. What football lessons could possibly be learned down here?

Then Meath kicked 2-6 in the first half and another 2-5 in the second, creating many other quality scoring chances. Was this a sneak preview of the next Leinster champions?

Far too early to say, obviously: indeed the expected semi-final showdown with Leinster champions Dublin didn’t materialise after events in Parnell Park. Instead, Meath will play DCU in next Sunday’s semi-finals, and Meath manager Mick O’Dowd is targeting a more than a O’Byrne Cup title in 2014.

“Yeah you’re looking to win games, but I don’t think winning an O’Byrne Cup is where our ambitions lie,” said O’Dowd. “We really wanted to get at least four games in the O’Byrne Cup, and winning here ensures that.

“The first half was very good, the attitude was excellent. We worked hard on our support play. I was delighted with it there. At times we were a bit tight, could have opened it up and made more use of the pitch a bit better. And in the second half some of our shooting wasn’t great. But I was happy enough, yeah.”

Gruelling conditions
The conditions were gruelling – the lines on the pitch washed out weeks ago, the floodlights flickering on for the second half. Wicklow appeared far more at sea than on home ground, going the entire first half without a single forward scoring from play, and relying on late goals from substitute James Sheehan and then Sean Furlong to leave something on the scoreboard.

No such problems for Meath. Stephen Bray and his brother David found the net inside the opening 11 minutes, with further points coming from Graham Reilly and Damien Carroll.

Second-half goals from Padraig McKeever and substitute Dalton McDonagh underlined Meath’s dominance, although they struggled to convert all the scoring chances. The conditions weren’t entirely to blame, and McDowd agreed Meath should really have finished with more than 4-11.

“Definitely, it could have been more. But for a lot of those goal chances, the right option was taken, fed to a player tapping into an empty net. That’s what you want to see. DCU have beaten Dublin now, and that’s another good challenge for us next Sunday.”

’s support work was impressive throughout the field, from full-back Shane Curran (who retired early with a shoulder injury), and Donncha Tobin at wing back. Conor Gillespie and Conor Sheridan showed up well at midfield, and the all six starting forwards scored from play.

Not the threat of a black card either, which may be interpreted by some as indicating a lack of competitive bite, although neither team was holding back.

Wicklow, as it turns out, didn’t hold back on training last week either, with manager Harry Murphy admitting that possibly left them a little flat.

He acknowledged that Meath had improved significantly since Wicklow ran them relatively close last summer.

“I think there is much more fluency in their movement,” he said. “They spread the ball very well, and bullied us a lot of the time. . . . Meath were sharper, much sharper here.

“We weren’t at the races at all in the first half. But we got the three competitive games out of it and that’s what we wanted at the start of the competition.

“Some of our defenders will be back by the time the league starts (Leighton Glynn, etc), that’s what we are aiming for.”

1 Connell losing touch with club championship is real tragedy of Normal People
2 Ger Loughnane and the spark that lit Clare’s hurling revolution
3 The strangest fishing club in the US and the huge pike that bit a schoolboy
4 TV View: Sky’s talk of piped-in atmosphere is ominous
5 Shane Ryan: Shark attacks and gruelling shifts on a Covid-free Atlantic mission
Real news has value SUBSCRIBE