Meath come back from the dead to draw with Cork 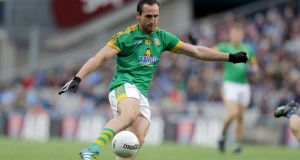 Meath’s renowned never-say-die qualities surfaced again on Sunday, when they came from nine points down to earn a draw against relegation threatened Cork at Pairc Ui Rinn.

When Cork centre-back James Loughrey surged forward to land Cork’s 15th score after 45 minutes it looked to be over for the visitors, but they never gave up the chase with the wind at their backs.

Meath scored 1-6 without response in a devastating 15-minute spell to turn the game on its head. Corner back Donal Keogan popped up with the goal after 55 minutes before a Donal Lenihan free levelled matters with six minutes remaining.

Then, substitute Sean Tobin edged Meath in front for only the second time, but a Colm O’Neill free and a Barry O’Driscoll score nudged Cork ahead again entering injury-time.

However, in the closing act, three minutes into injury-time Meath captain Graham Reilly was fouled and Lenihan kicked the equaliser.

Cork scored seven points without response in the opening 20 minutes to lead by 0-12 to 0-5 at the break - with O’Neill and Mark Collins prominent.

1 Gordon D'Arcy: Ireland must go after victory by frightening France into mistakes
2 Henshaw the only change as Andy Farrell names Ireland team for Paris
3 Seán O’Brien: Anger over my parents’ break-up never left me
4 Giovagnoli’s appointment at Dundalk ‘a great story’ says Arsenal boss Arteta
5 Cian Healy: ‘Realistically I got away with murder when I was younger’
Real news has value SUBSCRIBE