Mayo’s opening night too much for NUIG 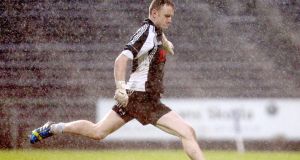 Goalkeeper Robert Hennelly was the only player from the starting side which lost the All-Ireland to Dublin on a Mayo team which opened their Connacht league game with a hard earned win over NUIG at MacHale Park, Castlebar on Friday evening.

As well as being the only survivor from September, Hennelly also captained the side.

Back-to-back points from Darren Coen in the second half appeared to have put Mayo in control but they coughed up a soft goal to Seán Moran five minutes from time to leave just a point between the sides.

Coen tapped over his third free, while Michael Conroy added a late point to seal a win for Mayo in a game which produced just one black card.

Mayo led by 0-6 to 0-4 at half-time but were behind at one stage before Brendan Harrison levelled matters at 0-2 apiece on 15 minutes.