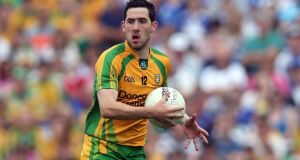 Mark McHugh opted out of the Donegal panel before the start of the championship, claiming a loss of appetite for intercounty football. Photograph: Inpho

Any sign of Mark McHugh? It’s the question that won’t go away as long as Donegal stay involved in the football championship, and team captain Michael Murphy politely answered it again yesterday: no sign yet, but that doesn’t mean there won’t be.

“It’s the same story,” said Murphy. “The door is always open for Mark. As far as I know, he’s in New York at the moment, and that’s the last that I’ve heard of it.”

McHugh opted out of the Donegal panel before the start of the championship, claiming a loss of appetite for intercounty football, and a desire to focus on his club instead.

Manager Jim McGuinness has also claimed the door remains open, but it now seems certain McHugh won’t be back on board before Donegal’s Ulster final showdown against Monaghan on Sunday week.

Murphy watched last Sunday’s semi-final replay between Monaghan and Armagh with obvious interest, and the result now focuses Donegal’s mind on the team that beat them in last year’s final, taking their Ulster title in the process, and beginning the process that saw them surrender their All-Ireland, too.

“It’s a massive proposition heading into the Ulster final,” said Murphy. “Both teams will see it as a fantastic opportunity to win an Ulster championship. Both sides have played each other a lot of times in recent years and Monaghan have probably had the upper hand. They’ll be going in with great confidence. We’ll just be targeting a good performance.

McGuinness, meanwhile, has recently been handed extra responsibilities in his role as performance adviser with Celtic FC, although Murphy sees no difficulty with that: “It’s been fantastic for him and he’s been an absolute credit.

“His enthusiasm is brilliant and he’s never missed a training session in two years. That’s testament to the man. Making that initial decision, he had to weigh up all the options.

“We see the best of him here and I’m sure Celtic see the best of them there. And I’m sure he’s brought some of the stuff he’s learned there back to us. They’re different sports but it’s a team environment and he’s such a great teacher.”