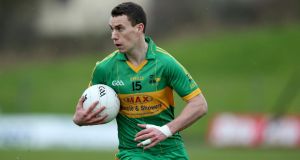 How painful this was for Wexford champions, Gusserane O’Rahilly’s as Rhode simply strolled to the most convincing of victories in this Leinster Club senior football championship opening round game played at O’Kenbnedy Park, New Ross.

Two goals inside the opening five minutes from Ruairi McNamee and Niall McNamee had the Offaly champions leading 2-2 to 0-0. Their dominance was to continue right through the first 20 minutes as they added further goals through Paul McPadden and Anton Sullivan to lead 4-7 to 0-0.

Gusserane had to wait until the 22nd minute for their solitary first half score, a Shane Cullen pointed free, but Rhode finished out the half adding three further points through Conor McName, and two from Niall McNamee - while in between they saw an Anton Sullivan 27 minute penalty palmed away by keeper Micheal Ryan for a fruitless 45. Nevertheless they still led 4-10 to 0-1 at the interval.

The Wexford champions looked desperately short of this standard as their struggle was to become more pronounced through the second half. Rhode, despite utilising their full bench, continued to control the game as Niall McNamee kicked over some superb points.

Two of Gusserane’s three second half points arrived in the closing minute through Philip Wallace and substitute Paul Wallace, but just to demonstrate their dominance Rhode finished matters off with a James McPadden goal.

A stirring second-half performance from St Columba’s saw the Longford champions record their ever first win in the Leinster Senior Club Championship as they overcame 14-man Stradbally at Pearse Park.

Mullinalaghta were full value for their win with Shane Mulligan, Donie McElligott, Michael Cunningham and James McGivney all contributing with late points to secure this fine win.

The Longford side made a terrific start to game, kicking over four unanswered points, but Stradbally replied with three of their own to make it a one-point game in the 12th minute.

Mullinalaghta went three ahead in the 16th minute with Rian Brady and Jayson Matthews (free) on target but Pádraig Fitzpatrick and Jody Dillon cut the gap to one in the 19th minute. The Longford side were ahead by three again in the 22nd minute with a goal from Aidan McElligott.

The sides though were level in the 24th minute when Conor Delaney found the back of the net. The game changed in Stradbally’s favour in the 28th minute when they were awarded a penalty; Gary Comerford putting the spot-kick away. A fine point from Gary Rogers left two in it at the break; 2-6 to 1-7.

A free from David McGivney in the early stages of the second half cut the deficit to one before Darren Maher was red carded for a foul on James McGivney. With numerical advantage Mullinalaghta took a hold of proceedings and were able to kick on from there.

Louth champions Sean O’Mahony’s had to kick two late points in injury time to beat Baltinglass in the opening round of the Leinster club championship. They now play Moorefield in the next round.

O’Mahony’s led by three points at half time - Ben McLoughlin scored the first point of the game after 26 seconds, and added another two by the eleventh minute. The last of which catching the eye, beating three defenders before kicking a fine point.

Baltinglass relied on their free takers Joey Kelly and John McGrath for their four points in the first half. Christopher Heaslip did break through the defence on one occassion but goalkeeper Kevin Brennan palmed away his goal bound effort.

The second half didn’t start too well for either team with sloppy play and poor passing to the fore. It took 19 minutes for O’Mahony’s first point of the second half while Baltinglass didn’t score for 16 minutes.

O’Mahony’s led by three with 10 minutes to go but Baltinglass were level as the game entered seven minutes of injury time. Keith McLoughlin and David Dowling popped up for the two critical points and while John McGrath pulled one back, time had run out on the Baltinglass challenge.