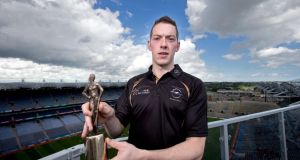 Laois’s Stephen Maher with his GAA GPA Player of the Month award for May, at Croke Park. Photo: Ryan Byrne/Inpho

If nothing beats match practice, Waterford’s first step into the All-Ireland hurling qualifiers tomorrow evening might not be as straightforward as it seems.

Standing in their way is a Laois team that has played six championship matches in the last two months.

Five of those came in the Leinster championship round-robin, before Laois pressed Galway to within two points in the quarter-final.

Waterford have home advantage at Walsh Park (7.0), although their match practice has consisted of a draw with Cork in the Munster quarter-final, followed by a heavy defeat in the replay.

Waterford manager Derek McGrath is without Brian O’Sullivan, who was given a two-match ban for an incident in the replay against Cork.

For Laois, getting within two points of Galway – 1-22 to 0-23 – might still have counted as a moral victory but for young forward Stephen “Picky” Maher – who scored 0-3 on the day – it was a missed opportunity.

“There was absolute devastation after it,” said Maher, who was named GAA/GPO hurler of the month for May for his role in bringing on Laois hurling. “No one knew what to say. We came so close and probably could have edged over the line . . .

“We were going five weeks in a row, and the last 10 minutes you are emotionally and mentally drained. It is just hard to stay going at that championship pace.”

For Maher there is no great secret behind their progression: manager Séamus “Cheddar” Plunkett has united every hurler in the county behind the same cause.

And the player believes their performance against Galway has left them with a burning desire to take one big scalp this summer.

Meanwhile, the fund-raiser challenge for former Waterford star Ken McGrath takes place at Walsh Park this evening, featuring several All-Ireland winners in the Munster versus Leinster line-up. McGrath recently underwent heart surgery and the teams will include many players that he lined up against during his outstanding career. The gates of Walsh Park will open at 6.0 for a 7.30pm throw-in.

nArmagh must plan for tomorrow’s Ulster SFCl semi-final against Monaghan without the trio of suspended players – Brendan Donaghy, Andy Mallon and Kieran Toner – after their appeal against a one-match ban was rejected by the GAA’s Central Appeals Committee (CAC).