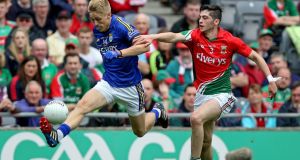 The strength of Killian Spillane (left) in front of goal ensured the Kerry minor team stayed comfortably ahead of defending champions Mayo in their All-Ireland MFC semi-final at Croke Park. Photograph: Donall Farmer/Inpho

In the 20 years since they last won an All-Ireland minor title plenty of Kerry teams loaded with potential have come and gone. Now comes a team loaded with potential and the belief their time has come too. Getting over that final hurdle won’t be easy, not with either Dublin or Donegal to come, but there was something about the way Kerry took out the defending champions that suggests they have the ability to end that 20-year wait.

Indeed the last time Kerry even contested an All-Ireland minor final was 2006, when manager Jack O’Connor was actually in charge of the Kerry seniors: O’Connor hasn’t taken on this minor team for the mere pleasure of it, and their class eventually revealed itself here with a second-half display that broke down their opponents while leaving plenty in reserve.

Six imposing points from Killian Spillane, 1-1 from Tomás Ó Sé, and 0-3 from substitute Liam Carey helped make the difference, yet only after a desperately nervous opening half from both teams.

Kerry effectively missed 1-6 in scoring chances (Mayo’s Eoin O’Donoghue making some crucial blocks) before they finally did score, after 20 minutes.

Mayo held out for as long as they could but after losing captain Cian Hanley with a knee injury in the first half, they were always up against it.

Matthew Flaherty, Michael Burns and even goalkeeper Shane Ryan (with a long-range free) made telling contributions, leaving O’Connor satisfied, if a little frustrated.

“I certainly thought we were the better team in both halves, but it wasn’t being reflected on the scoreboard, and that very frustrating,” said O’Connor. “But we were a bit nervous, and I’m hoping the Croke Park nerves will be one out of the system the next day, that we’ll relax a bit, and play the game we’re capable of playing.

“It was just that we snatched at chances in the first half. But they’re young and they’re nervous and once we settled them down at half-time, they we played much more controlled football in the second half.”

Still, Kerry weren’t in total control in the second half: Ó Sé made the deft strike under a high ball to finish the goal on 43 minutes, but Mayo struck straight back with terrific goal from TJ Bryne.

Later, Jordan Kiely missed a penalty for Kerry, although Spillane’s strength in front of goal ensured their stayed comfortably ahead, despite another goal from Byrne at the death.

“20 years has been a bit too long, yeah,” added O’Connor, noting Kerry’s wait since a last minor title. “It will be a massive one, with a big build-up. But it’s a great feeling to be in the final. There’s nothing like the month of

September, preparing for an All-Ireland final. It’s what we live for.”