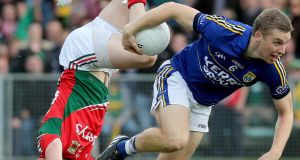 Mayo’s Lee Keegan takes a tumble as Kerry’s Peter Crowley makes off with the ball during the replayed All-Ireland semi-final at the Gaelic Grounds, Limerick. Photo: Donall Farmer/Inpho

After a week of controversy about venue and suspension or non-suspension, Kerry and Mayo in an epic that spilled over into extra time provided plenty more drama on Saturday evening in the Gaelic Grounds.

This All-Ireland football semi-final replay marked a changing of the guard at the top of football. Kerry, once again challenging for the very top honour, completed their progress from outsiders against football’s number two county by displacing them and staking a claim for the big prize.

As James Horan’s four-year period of management came to a close much of Mayo’s last stand was heroic. When Kerry looked to have landed telling blows, Mayo got up and responded. The exchanges were ferocious. Flurries of scoring by one team and then the other as each alternately looked to land the big punch.

But Kerry deserved the win. Their strategies had Mayo in constant difficulty and their outstanding strike force of Kieran Donaghy and James O’Donoghue were more capable of effortless-looking scores.

Mayo were cleaned out in the heart of it at centrefield. Barry Moran started this time but is one of five partners Séamus O’Shea has teamed up with in the middle during this championship. Kerry’s David Moran was exceptional, as both he and Antony Maher ended up with a decisive advantage.

Mayo can still feel hard done by. Misfortune befell two of their most valuable players when Aidan O’Shea and Cillian O’Connor, who had combined for their first two goals, collided at the end of the first half, and required lengthy attention for blood injuries. This delayed their introduction after the break and in O’Shea’s case certainly, appeared to affect his performance.

Then there was the refereeing. Cormac Reilly made some good calls but he backed off the necessary disciplinary calls and that failure tipped the match towards anarchy. Brawls broke out with no punishment.

Reilly issued just one black card – to Kerry captain Fionn Fitzgerald for a trip on Andy Moran – despite many opportunities and Kerry were the more obvious beneficiaries. Shane Enright was yellow-carded in the sixth minute with O’Connor and went on to bring down the same player for a penalty in the 18th minute.

A black card there and Kerry would have been down to 14, as opposed to being able to introduce smartly the surprisingly dropped Marc Ó Sé and call Enright ashore. Mayo will also feel aggrieved by the two frees that steadied their opponents in the first half of extra time, neither of which looked justified.

But overall Mayo couldn’t quite cope with Kerry, who squandered an opening quarter’s domination with a sequence of wides before coughing up two goals in quick succession to O’Connor.

Within three minutes of the penalty, which he himself converted, O’Connor was on hand to finish to the net after a great long ball from Jason Doherty – who shot three points during the match – had been caught by Aidan O’Shea, who took on the defence before passing into the square.

There was a resumption of the exhilarating match up between O’Donoghue and Keith Higgins. Higgins emerged with immense credit, getting in no fewer than five blocks or clean interventions but still O’Donoghue accumulated 2-6 – three points from play and two goals from penalties for fouls on him, neither though by Higgins.

One of the blocks ended up in Kerry’s first goal as Donaghy got to the rebound to fire to the net. Donaghy had Ger Cafferkey in trouble from the start.

In the second half, O’Donoghue’s first penalty from an off -load by Donaghy and the faintest of contacts by Colm Boyle gave Kerry the whip-hand. Andy Moran’s hand-ball into the net after Kevin McLoughlin successfully unsettled Kerry ’keeper Brian Kelly restored it to Mayo.

Cafferkey’s lunge for the ball took down O’Donoghue in the 63rd minute and the penalty put Kerry two in front, 3-11 to 3-9. Somehow Mayo recovered. Michael Conroy pointed and deep in injury time Donal Vaughan fisted an equaliser.

Rob Hennelly came centimetres close to swinging over a late free but Donaghy fisted the ball away as it dropped short.

Mayo started extra-time well and went two up. But Kerry’s bench tidied up the match. Barry John Keane converted the two disputed frees and Jonathan Lyne kicked two difficult points in the second half of extra time. In between Paul Geaney kicked another.

A couple of hit and hope frees were all Mayo could muster. In frustration O’Connor kicked Killian Young and was sent off - a sad conclusion to two great displays from the corner forward.

The free was also reversed and time ebbed away to leave Kerry looking as pleased as they’ve ever been with a semi-final win.