Eight changes from All-Ireland semi-final for rematch with Dublin 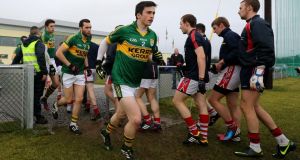 Paul Murphy will make his league debut for Kerry at right corner back against Dublin at Croke Park on Saturday. Photograph: Cathal Noonan/Inpho

Kerry will hand out league debuts to corner back Paul Murphy and corner forward Stephen O’Brien for Saturday night’s NFL opener against Dublin at Croke Park.

In all there are eight changes from the side that lost the thrilling All-Ireland semi-final to Jim Gavin’s, with injuries and players being rested added to by the fact that Dr Crokes are still involved in the All-Ireland club championship.

Paul Galvin and Aidan O’Mahony will both start the game from the bench after returning to training in recent weeks, while Marc Ó Sé and Declan O’Sullivan won’t return until later in the league campaign as they are on extended breaks.

Rathmore’s Murphy comes in for Marc Ó Sé at right corner back, while Peter Crowley moving from centre half back to right wing back to take the place of the retired Tomás Ó Sé. Brian McGuire takes over from Crowley, with Jack Sherwood coming in on the left for Dr Crokes player Fionn Fitzgerald.

David Moran takes over from Johnny Buckley to partner Anthony Maher in midfield, while Jonathan Lyne and Michael Geaney take over from Galvin and Cooper in the half forwards.

James O’Donoghue moves to full forward for Declan O’Sullivan, with Barry John Keane at right corner in place of the injured Darran O’Sullivan and O’Brien on the left.

Bryan Sheehan was ruled out following a knock picked up in a recent trial game and he joins Darran O’Sullivan, Kieran Donaghy and and Killian Young on the injured list.

Beaten All-Ireland finalists Mayo will also hand out two league debuts for their opener away to Kildare in Newbridge on Sunday.

Eight of the side that started the All-Ireland final against Dublin will be in action, with Andy Moran captaining the side from full forward.

Tyrone have made eight changes from the side that beat Derry in the McKenna Cup Final for the league meeting between the sides at Celtic Park on Saturday night (7.0pm).

Four players will make their league debuts, with Barry Tierney in at left half back, Conan Grugan playing alongside Niall McKenna in midfield and Shay McGuigan and PJ Lavery both named in the half forwards.