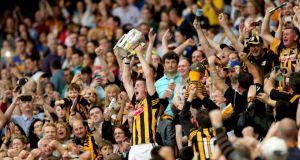 Ken Dryden’s The Game is one of the great sports autobiographies of all time. Dryden was goalkeeper for the Montreal Canadiens, a team that dominated ice hockey throughout the 1970s. He played for eight seasons, and won the Stanley Cup six times. He went on to serve as a member of parliament and as the minister for social development in his native Canada, and was an extraordinarily good writer – parts of the book read like a Richard Ford novel.

I sought out a print copy after being recommended it by Donal Óg Cusack’s this year. It’s excellent on any number of topics, including just how it is that a good team can keep winning. It was interesting to read that after a while the players’ own desire to match the standards they had set for themselves was what drove them on, when nothing from outside the group had the power to motivate them anymore.

The book is as thorough an examination of the life of a sportsman as you can get – so when he doesn’t mention, even once, any desire to be popular, or a desire to be loved by anyone other than his own fans, you must take it on its merits. He truly couldn’t have cared less. Great teams and great organisations couldn’t care less.

That omission only struck me now, a couple of months after reading the book, when I look at our two All-Ireland champions – Kerry back on top in football to widespread approval, and this all-conquering Kilkenny team, revelling in a 10th All-Ireland for Brian Cody and Henry Shefflin. You can say with a reasonable degree of certainty that since 2008 there has been a general appetite around the country for a new hurling team to dominate the landscape, but Kilkenny remain. That’s six years of feeling put upon, even when that comes with a huge dose of respect and praise.

Much as it would aid our understanding, there is no secret elixir contained deep in the bowels of Nowlan Park, hermetically sealed from the outside world. There is a culture of excellence, and that’s enough. And if they fail to capture the hearts of the nation in the way that the Kerry footballers can, that doesn’t appear to be something that worries them unduly. No-one likes us, everyone likes us – neither of our All-Ireland winners care unduly this October.

And with our two champions now crowned, it would appear that monotheism is alive and well – Kerry and Kilkenny, the great specialists, end the year as All-Ireland champions once again. We’ve spent a lot of time this year imagining what the GAA must look like to British eyes (if I never read another online aggregation of tweets from ‘startled new GAA fans in the UK’ again I’ll have done well) without ever really taking on the question they might well have been asking, which is – what exactly joins these two sports together anyway? Aren’t they totally different?

The dual player is the best answer to that, but we all know what a trying summer it’s been for them. And in August we were told that ‘football needed two good semi-finals’ because the hurling had been so good all summer.

In September ‘hurling needed a good final after the football semi-finals’. We have a strange habit recently of pitting both sports against each other, when it’s only analysts on TV doing it. It just strikes me as a strange way of framing a good game in your chosen sport, but the dual player argument at county level is symptomatic of a growing unease at club level at the incompatibility of playing both sports.

The GAA wrings its hands at a lot of things, but there doesn’t appear to be much of an appetite to try and safeguard clubs that genuinely try and offer both sports to all its members. . . not just those under the age of 16.

If we want the association between the two sports to be about more than just a feeling as we walk into Croke Park, or the dimensions of the pitch, we need to try and encourage clubs to offer both sports as a viable option. But as long as Kerry and Kilkenny keep harvesting All-Irelands at their current rate (16 since the turn of the millennium), the argument in favour of specialisation looks, sadly, rock-solid.

1 Kevin Babington: Learning to live again after life changed forever on Long Island
2 Can Thiago bring the right dynamics to save Liverpool from entropy?
3 Tour de France: Every yellow jersey winner must feel guilty by some association
4 Diminished Dele Alli shows the gulf between talent and expectation
5 Matt Williams: The sky is not falling in on Irish rugby - but Ireland do need a new plan
Real news has value SUBSCRIBE