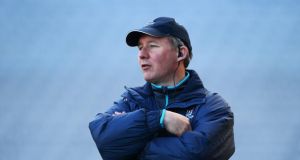 After a stop-start campaign Dublin find themselves just one match from an unprecedented – for the county – third successive League title.

Manager Jim Gavin was asked had this come as a surprise. “Am I surprised? We’ve gone from game to game and genuinely that’s the way we approached it. It’s not our long-term ambition this year. Monaghan are six weeks out from a championship; we’re out the week later. We’re in very similar cycles in those terms so I’m sure that was their focus going into this game – and for us as well.

“We’re trying to give players more game time and build towards that end. When you look at our first couple of games we have tried a lot of players . . . We tried a few new things, some have worked, some haven’t.”

The housekeeping side of the press conference touched on his disappointment with the team’s “core skills” of tackling and hand passing as well as his disinclination to risk Bernard Brogan and Rory O’Carroll who each had “soft tissue injuries”. He also confirmed Alan Brogan, who has missed the league, is expected to return to training in the next couple of weeks. The overall impression was of someone distracted by the imminence of championship rather the beckoning immortality of three leagues on the trot.

“Today we wanted to get to the pitch of the game earlier. We wanted to make sure they didn’t get away on us. We were more competitive right the way through and that’s what we wanted to do today. I think we did that.”