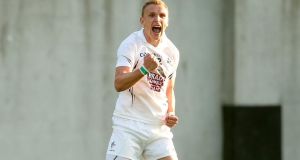 They are guaranteed another on Saturday evening in O’Connor Park mainly because Laois were unable to protect possession long enough for their more settled panel to drive into a provincial semi-final against Dublin.

The Leinster champions will be unmoved by this entertaining yet error-strewn display. Of course both teams should improve now.

“We’ll take huge positives from this,” was Ryan’s stance. “Like, everybody could pick that Laois team. Everybody knew who was going to be playing . . . They’re a settled team.”

His point being Kildare remain ‘in transition’.

This was summer football devoid of maliciousness, although Laois under Flatharta are hardly naive. They used Robbie Kehoe in front of fullback Mark Timmons. Playing into a first-half gale they delivered sensible, low balls for Ross Munnelly and Kingston.

Still, Kildare led 0-9 to 0-8 at the turn, but it was hard not to wonder how Dublin would feast on this wayward passing.

If Laois eradicate half of these errors they should progress despite Kildare performing better than their league form had hinted. Slipping into 0-4 to 0-1 arrears, Kildare found their stride through Padraig Fogarty, Eoghan O’Flaherty and Alan Smith scores.

Kingston, the best player on view and certainly the most imposing, nudged Laois two clear before Eamonn Callaghan and Smith points reeled them in again. Then the tide turned for Kildare after scores from Gary White and O’Flaherty. Tit for tat. Typical midlands derby devoid of maliciousness.

“Wouldn’t pay attention to that to be honest,” said Colm Begley, the Laois veteran of other styles of Gaelic football. “When you’re involved in a game . . . malicious is a different word. Everyone is going hard for the ball, pushing themselves hard on the pitch.

“We are improving and I think we’ll learn a lot from that game and push on to next week.”

Enter Moolick. He quickly pointed but really should have claimed the evening’s only goal. His shot was blocked by goalkeeper Graham Brody with Paul Cribbin at least following up to keep Kildare in the ascendancy.

Another Munnelly free tied it up before Kingston put Laois ahead for the first time in the second half with just over 10 minutes to play. O’Loughlin’s second point, a moment of poise and class when dummying through traffic, felt like the anvil that would crush Kildare.

Kingston’s eighth point, his third from play, seemed like the insurance score, unless Kildare plundered a goal. The chance did come, falling to Callaghan, whose instinctive yet poor struck shot trickled wide.

But Kildare kept chipping away as Laois retreated and tried to foul their way to full-time. Two O’Flaherty frees brought it back to the minimum. Then Moolick levelled it before, with the last play, Paul Kingston, the younger brother, had a shot to win it. It drifted wide.