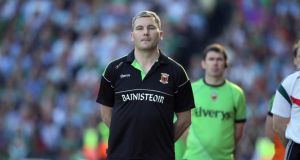 Mayo manager James Horan: “I think refs need to be at a semi-professional level.” Photograph: Inpho

Mayo manager James Horan has called for GAA referees to become semi-professional in an effort to ensure that new rules are implemented properly. Horan said last night referees are being burdened with more and more duties and that it is becoming increasingly difficult for them to carry out their functions.

“Refs in Gaelic football, I just think it’s insane what we expect them to do. It’s probably one of the biggest fields in a field sport, with 30 players and they do timing, they do everything and we’re throwing more rules or officialdom on top of what they’re already trying to do. I just think it’s becoming an impossible job for one man to consistently at a high level with the pace the game is now to stay on top and it’s just getting impossible for refs.

“I think refs need to be at a semi-professional level. They need to be brought in once a week and maybe do two or three days’ camp after all intercounty games to get a consistency and breed a level of competency there and take all the debate out of it,” said Horan, who added he is favour of the black card once referees implement it consistently.

Gavin Duffy
Meanwhile, Horan has not ruled former Connacht rugby captain Gavin Duffy of featuring against Roscommon in the Connacht championship on Sunday week against Roscommon. Horan said Duffy is training a few times a day to help him adjust from being a profession rugby player to a Gaelic footballer.

It is unlikely Duffy will feature in a Mayo jersey for some time but Horan said last night every player in the squad was in contention for a place in the Connacht semi-final on Sunday week. “From a skill point of view he is working hard on his handpassing. Simple little things like that can be the most difficult. Kicking is actually quite good and kicking is one thing you’d think he would struggle but the kicking is very strong.

“He is training a couple of times a day trying to catch up. If you are kicking a couple of hundred balls a day your timing and technique will improve quickly,” said Horan.

Barry Moran and Jason Gibbons are in a race against time to be fit for the clash with Roscommon, with both extremely doubtful to feature, but Horan said Mayo are in a good position on the injury front as they bid to complete a four-in-a-row in Connacht for the first since the early 1950s when they won two All-Ireland titles.

‘Under pressure’
“Jason Gibbons isn’t healing as quickly as we would like so Jason would be under pressure to be available. Barry Moran is recovering well, Michael Conroy got a knock at the weekend on his ankle, Enda Varley is a little sore for the weekend but outside that we’re not too bad. Any of the injuries that were there are recovering, so we’re heading towards a strong panel,” said Horan.

He said goalkeeper David Clarke played for his club Ballina Stephenites at the weekend and is back in contention, but Shane McHale is still a few weeks away from returning.