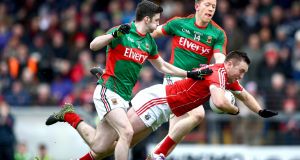 Cork gave new manager Peadar Healy an encouraging start to his tenure with a surprisingly comfortable victory over a well-beaten Mayo in front of a crowd of 4,649 at Pairc Ui Rinn on Sunday.

Backed by the appreciable wind from the throw-in, Cork established a commanding eight-point advantage by the break and despite finishing with only 13 players, still had too much for the visitors, who were off the pace.

Even though Cork lost Brian O’Driscoll to a black card and Andrew O’Sullivan to a second yellow after 67 minutes they were still out of sight.

Their last score was the game’s only goal in the 57th minute, Brian Hurley converting Cork’s second penalty after busy Mayo keeper Robert Hennelly had earlier denied Daniel Goulding with a smart save to his left.

Indeed but for Hennelly’s heroics Cork’s winning margin would have been even greater after he pulled off superb saves to deny Hurley and Mark Collins. Mayo’s only comfort was claiming the closing five points.

Cork’s 0-12 to 0-4 interval lead owed much to the potency of their inside line, particularly Hurley and Goulding, who benefited from some clinical approach play from the likes of new captain Paul Kerrigan, Luke Connolly and Collins.

Despite conceding an obvious height advantage managed to still more than break even in the critical middle sector with Ian Maguire and O’Sullivan managing to negate Tom Parsons and Jason Gibbons.

Jason Doherty looked the most likely Mayo forward in the period though Evan Regan came closest to scoring a goal, denied by Ken O’Halloran’s smart save in the 12th minute with the scores tied at 0-2 apiece.

That triggered an impressive Cork response as they reeled point after point, registering four on the spin before Conor O’Shea finally broke free of Eoin Cadogan’s close attentions to break the spell.

It was only a temporary reprieve, though, because Cork took over once again to add another five without response. Connolly fired over from a 50m free, Goulding supplied the scoring touch to a brilliant move before adding another from distance.

Although Lee Keegan raised some cheer for the travelling Mayo supporters with a fine point, the closing score came from Cork centre-back Brian O’Driscoll, again hitting the target from way out.

Mayo’s plight was reflected in the introduction of Aidan O’Shea on the half-hour. Although listed to start, the Breaffy powerhouse had to be content with a place on the bench before answering his county’s SOS call.

Mayo needed a quick response on the resumption to get back into the contest, but pattern didn’t change. Maguire stole possession from the re-start before surging forward to land an inspiration point after just 20 seconds.

Kerrigan, who revelled in his new role, added to Mayo woes with a wonderful score following Collins’s neat flick close to the sideline. Even within seven minutes of the resumption, Cork’s 0-15 to 0-4 lead looked unassailable.

Hennelly’s penalty stop couldn’t fire his side either as Cork stretched their lead with a glorious Connolly free from way out on the left wing before O’Driscoll made it five successive points and a 13-point lead.

Cadogan was forced off injured after a fierce collision with Keegan, who later had to be carried off, but by that stage the league points were already in Cork’s possession.

GPA asks delegates to vote against hurling black card at congress 18:33
Dan Tuohy explains ‘rotten to the core’ comments 18:08
Serie A matches to be played behind closed doors due to coronavirus 17:54
Sam Bennett sprints to second in stage two of the UAE Tour 15:55
Northern Irish FA ban children aged 12 and under from heading footballs 15:18
Crossword Get access to over 6,000 interactive crosswords