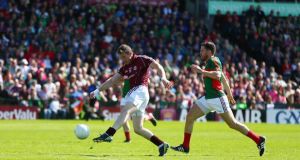 Mayo would have won numerous All-Irelands over the past decade if they had any forwards, right?

Well perhaps the old adage is misplaced and the Connacht kingpins need to take a look at their defence rather than their much-maligned attack.

Over the past three seasons Mayo have conceded 41 goals in their 34 league and championship games against Division One opposition. The All-Ireland champions in each of those seasons – Donegal, Dublin and Kerry – have conceded just 32 goals in 35 games under likewise conditions.

When only taking championship games into consideration Mayo have conceded 13 goals in nine games while the three All-Ireland champions have conceded just 11 goals in 12 games.

In contrast the Mayo attack have been equal to the level that’s been required to claim that elusive All-Ireland.

The champions of 2012, 2013 and 2014 have averaged 1-15 against Division One opposition. Mayo can boast the exact same scoring average.

Of course there were periods in both of Mayo’s All-Ireland finals defeats, and in last summer’s semi-final draw and replay defeat against Kerry where Mayo squandered numerous chances to capitalise on their obvious momentum.

Yet in those three championship defeats Mayo conceded 7-39, that’s an average of 2-14 a game.

Once more Mayo’s fragile back division was exposed against Galway in last Sunday’s Connacht semi-final victory. Galway managed two goals, neither requiring too much in the way of industry. Mayo did themselves though score 1-15.

While Mayo have made some defensive improvements during this year’s league, despite losing out on a semi-final spot for the first time since 2011, there is still clearly work to be done.

In seven league games this year Mayo conceded 7-79. Rewind 12 months and that figure was an astounding 16-106.

Indeed, in 2014 the Mayo defence was particularly poor and they conceded 22-153 in 11 games against Division One opposition, whether it was in the league or the championship.

In the 2012 championship Donegal conceded just two goals to top-flight teams in the championship. Mayo let in four goals in their three games against Down, Dublin and Donegal. Of the past three All-Ireland champions only free-scoring Dublin were more prolific than Mayo en route to victory.

Dublin’s scoring average that season was an impressive 2-14 per game against their fellow Division One sides. They conceded 13 goals in those games, five in their four championship outings against such opponents.

Mayo conceded the same amount but in two games fewer. So while Mayo remain reliant on Cillian O’Connor for the majority of their scores, and he on placed balls, it looks that falling short over the past three summers may in fact be more of a defensive problem than an offensive one.