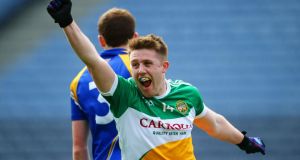 Frustrated Longford manager Jack Sheedy gave the “promise” of a strong response when the opportunity for revenge on Offaly is presented next month.

Longford’s strong recent form against Offaly counted for nought on Saturday as the Faithful claimed the Division 4 league title at their ease.

Offaly impressively tallied 3-9 in the second half and finished strong to turn the corner on three straight defeats across the league and Championship in the last year or so.

The midlands sides will meet again on May 16th in the first round of the Leinster championship and Sheedy guaranteed a different Longford team will turn up in Tullamore.

Asked if this result will have an impact on the Championship game, the Dubliner nodded solemnly. “It’ll have an impact alright, I can promise you that, a positive one,” said Sheedy. “Maybe a sense of having already qualified and gotten promotion was at play, maybe lads were thinking about three weeks’ time or there was a sense of this not being as important as the group game a few weeks ago. Maybe all of that got into fellas’ psyches and diluted their desire, I don’t know.”

Offaly manager Pat Flanagan hopes to be back at Croke Park on May 31st to play Dublin in a Leinster quarter-final.

“It’s great to get the win up here and hopefully we get the opportunity to come back up and play Dublin,” said Flanagan. “If we do and if we can play as well as we did against Longford and add another 10 or 20 per cent then who knows? Dublin are an extremely good football team, they’re going to be there or thereabouts in the championship at the end of the day. This is good preparation for us, that’s really all is is.”

Flanagan was happy with his side’s scoring gains but praised his defence for their miserly spirit. They leaked just 1-5 from play throughout and restricted Longford to scores from placed balls for most of the second-half.

“We’ve worked seriously hard on our work rate this year and on the intensity of our tackling as well, it’s paid off,” said Flanagan. “What it does is turn the ball over to give opportunities to the boys up the far end. And a lot of those forwards worked exceptionally hard to give the boys at the back some rest. It was particularly good to see us only conceding 1-12 on a pitch the size of Croke Park against a quality team.”