Dublin have plenty to spare against Kildare 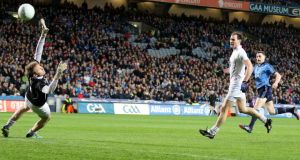 Dublin 1-22 Kildare 1-12: Dublin kept their stranglehold over Kildare intact with an unfussy 10-point victory in Croke Park. Kevin McManamon stood out a mile with an eight-point contribution, with Jonny Cooper and Cian O’Sullivan impressive as well. Jason Ryan’s side hung in for long periods without ever threatening to overturn their woeful recent record in the fixture.

In front of 20,525 paying guests, Dublin started well and took a 1-10 to 1-6 lead to the break with them before kicking on in the second half. They threatened many times to loose the chains that bound them and Kildare together but for as long as they left gaps in defence, they ensured Ryan’s side were no forlorn hope.

Kildare scored one goal but could have had six – a combination of poor finishing, smart goalkeeping and the Croke Park woodwork keeping them at bay.

The found themselves heavily punished for those misses too. Within a minute of Cathal McNally palming the ball against the butt of Stephen Cluxton’s post at one end, Paddy Andrews had it in the net down the other. Instead of reducing the margin to a point, Kildare went seven behind.

It was a similar story in the second half when first McNally (crossbar) and then Tomás O’Connor (Cluxton) were denied. Had either of them found the net, Kildare would have hauled themselves back from an unpromising position to get within a single point again. Instead Dublin reeled off three points in as many minutes to put the game to bed.

The one blight on the evening for Dublin was an early knee injury to Ciaran Kilkenny. He was taken off immediately and will have a scan on Sunday morning. “Ciarán is in good spirits, that’s the most important thing,” said Dublin boss Jim Gavin afterwards. “He will have a scan and we will hope for the best.”

In the night’s other league fixture Armagh proved too strong for Laois at the Athletic Grounds, winning the Division 2 clash by 2-18 to 1-12 to move up to third in the table.

Andy Murray to return to action on June 23rd 09:18
Cricket Australia boss casts doubt over ‘high risk’ T20 World Cup 08:41
Boston Marathon cancelled for the first time in 124-year history 08:00
Premier League to restart on June 17th, Andy Farrell on lifting the Monday blues 07:43
Anfield and Cheltenham show sports again lacking in looking after their own 07:00
Crossword Get access to over 6,000 interactive crosswords