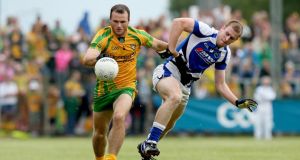 The secrets and lies of the football championship. Donegal identified five things that went wrong against Monaghan in the Ulster final, corrected them here against Laois, but would prefer to keep the exact nature of them secret.

“Normally I would tell,” said manager Jim McGuinness, “but it’s within our own group. It’s important to the group and we just decided that it was best to keep it at that, try to develop it and work on it and move forward.”

McGuinness didn’t want to lie either about exactly what was said to his Laois counterpart Justin McNulty when the physicality of this game spilled onto the sidelines, after 27 minutes, with McNulty shoving McGuinness aside – twice – as the Donegal manager tried to point out his concerns of over-physicality to the sideline official. McGuinness somehow managed to restrain himself:

“Well, you have to,” said McGuinness. “You are there to lead your team and you are not leading anybody when you get involved in that. And if our focus is somewhere else then we are not doing our job properly. But Michael Murphy was third-man tackled out of the game so I went to the linesman and I said ‘this is going on every single day we play at the minute, are we going to do something about it?’ And in fairness to him he dealt with it.”

Laois certainly put it up to Donegal in the physical sense, but that was the limit of their challenge. Donegal never looked like losing, not because they were particularly impressive, but because Laois never looked capable of winning. McNulty was a little more frank about his team’s shortcomings.

“We missed opportunities, in the first-half especially. We’d a clear-cut goal chance and we spurned it badly. On occasions we were trying to play the eye of the needle pass into the full-forward line when they had the numbers there, and we should have held on to possession.

What is certain is that Donegal had no fear of becoming only the third team ever to overcome the six-day turnaround after losing their provincial final: “The best thing that ever happened us was the six day turnaround,” said McGuinness. “We didn’t want 14 days, licking our wounds.”

Still, it was 12 minutes before Colm McFadden struck his first free for Donegal, but Ross Munnelly briefly levelled it five minutes later. But Donegal added four more scores before the break – points from David Walsh, Patrick McBrearty and Michael Murphy, and another free from McFadden making it 0-5 to 0-1 at half-time.

Donegal extended their lead to five points in the second half, on two occasions, but still Laois hung in there, points from Davy Conway and a free from Munnelly reducing it back to two – 0-10 to 0-8, with five minutes remaining.

Donegal looked a little shaken again, but held enough composure, McFadden and McBrearty conjuring up scores, then Neil McGee and Leo McGloone having the final word.

Laois ended up with 14 men too when Conor Meredith was straight red-carded near the end for not letting go of Rory Kavanagh.