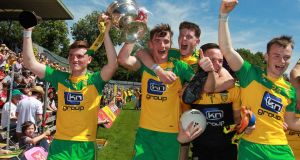 Nathan Boyle and JD Boyle grabbed the goals that sealed a sixth Ulster MFC title for Donegal in Clones on Sunday.

The Tir Chonaill lads survived a late rally to win provincial honours for the second time in three seasons.

In true Donegal spirit, a packed defence denied the Oak Leafers time after time, particularly in the highly charged closing stages when they desperately needed a goal.

And Shaun Paul Barrett’s side were able to break at pace for the late scores that saw them safely over the line.

Caolan Devlin’s stoppage time goal came too late to save the defending champions, who remain in the All-Ireland race via the back door.

Midfielders Patrick Coney and Oisin McWilliams floated over early scores to get the Derry lads going, and their finishing contrasted with that of the erratic Derry men, who shot a succession of wides, and failed to score in the opening quarter.

Derry had opened out a four points lead by the time Niall O’Donnell opened the Tir Chonaill account in the 17th minute.

But they went level four minutes later when JD Boyle finished an incisive move to the net.

Caolan Devlin knocked over a a couple of Derry frees, but two superb Eoghan McGettigan scores helped Donegal to a 1-4 to 0-5 interval lead.

Ben McKinless denied Donegal a second goal with a fine save from Enda McCormick, but they did hit the net again when Nathan Boyle smashed in a shot off the crossbar in the 43rd minute.

Derry responded with a string of converted frees from Devlin, but they still trailed by two points going into the closing eight minutes.

As they threw everything into attack, they were caught on the breakaway, with Niall O’Donnell firing over a couple of points as Donegal went five clear, before Devlin palmed home a consolation goal in stoppage time.

Leona Maguire and Stephanie Meadow embark upon historic 2020 season 11:00
Naomi Osaka and Coco Gauff set up repeat showdown in Melbourne 08:41
Arsenal deny Chelsea at the death; Why there’s more to Saracens than money 07:51
Novak Djokovic swats aside Ito to reach Australian Open third round 07:20
Seán Moran: Total disregard for schools as GAA votes one way and acts in another 08:10
Crossword Get access to over 6,000 interactive crosswords