Denis Bastick revelling in the perfect end to a trying week 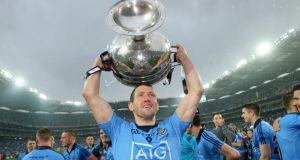 Denis Bastick: “Anything is possible with this team. We’ve three All-Irelands, early in the decade, and who knows what can happen.” Photograph: Ryan Byrne/Inpho

There are several ways of handling nerves in the week of an All-Ireland football final, although Denis Bastick would rather it didn’t involve having his car stolen, along with a wad of cash and the baby buggy belonging to his seven-month old son, Aidan.

It definitely wasn’t the ideal start to the week, when Bastick woke up last Monday morning to discover his Audi A4 missing from outside his home in Templeogue in south Dublin, hardly a hotbed of the city crime scene.

The thieves, using that cheap technique, had fished the car keys from inside his hall door, before promptly driving off into the still of the night.

“Yeah, I was dealing with all that for the early part of the week,” Bastick recalled yesterday, smiling about it now, for lots of reasons: it clearly didn’t impact on his midfield performance as he helped drive Dublin’s authority over Kerry, and he also got the car back, plus the buggy, and the cash – which was actually from his allocation of All-Ireland final tickets.

“It knocks you back a bit, upsets things at home, you feel invaded, but talking to the insurance people on the phone and stuff it also took my mind off the game itself. So yeah, a nice little teaser to throw into the mix the week of an All-Ireland final.”

At 34 Bastick is now considered the grand old man of this Dublin team, although he’s not necessarily done yet. Winning a third All-Ireland at the latter end of his career has possibly given him the incentive to continue into 2016, although he admits that decision is still ultimately some distance away.

“Yeah, it took a long time to get there. But once we got over that first one, it kind of opens the door. Then to get three, looking back now, and the players who have done it the past, it puts you in distinct company. And I’m delighted with that.

“And 2014 was a tough year. Injury after injury. And to flip it over this year, and the way I was able to get through this year. It’s a matter of luck, really, to get through the year without picking up anything too serious. It makes a huge difference, to any of the lads, who have come through a full year training. You give yourself a really good shot, and that’s what happened to me. I got to start in the All-Ireland final, and that’s the dream come true.

“I probably was close to retiring last year. You like to get something back out of it. And when you’re struggling, and the body is breaking down, then you do question yourself. But I spoke to Jim Gavin, spoke to the family, and I’m just so happy I made the right decision, at the start of the year.”

Now it’s about making the decision which he feels equally right about: “I’m blessed. I’m lucky. You come along and there are a lot of great players that went before me, never got a chance. I came along at a time when fellas really upped it and performed. Winning this one does alter the decision slightly about next year.

“I’m under no illusions either, it doesn’t guarantee me anything next year. The level it has gone up to in terms of time and commitment. Work is affected, family life is affected and you really have to balance that up. I’ve a young son there as well, I know if I gave it another year I’d miss him growing up for another year of his life. But if I do move on there is going to be a huge void left. This is all I have known for 10 years and it gives you a lot of structure in your own life. Keeps you on the straight and narrow and for that to be removed, it would be a huge difference in my life and a huge adjustment for me.

“But I’ll mull over it and see. To step away from a great group of guys, the family and team ethos we have, and the great days that we have, won’t be easy. We all know that All-Irelands aren’t easy to win, and it’s very hard to do it back-to-back. But I suppose look at the age profile, the experience, and what they bring. Anything is possible with this team. We’ve three All-Irelands, early in the decade, and who knows what can happen.