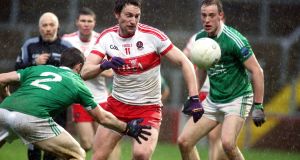 Derry gave a glimpse of their attacking threat in a prolific second half to clinch an opening round league win in Division Two.

New manager Damian Barton promised to get Derry playing a more expansive game this year, and they blitzed with Fermanagh with an unanswered 1-7 in a 19-minute spell in the second half to take control in Celtic Park.

Fermanagh, the better side early on, should have led by more than 1-6 to 1-5 at the break and were made to regret some poor shot selection when Derry came out for the second half a team transformed.

Cailean O’Boyle and Mark Lynch added second-half goals, O’Boyle’s goal part of the 1-2 Derry scored in 90 seconds between the 45th and 47th minutes.

It was all Fermanagh in the early stages, Sean Quigley and Ruairi Corrigan scoring early points from play.

Derry’s porous defence was found wanting again when Ruairi Corrigan ghosted in at the far post and drilled a shot across the goalkeeper.

Conor McAtamney’s well-worked point was a sign Derry were getting to grips with the game and Benny Heron’s 25th minute goal put Derry ahead for the first time.

A quick exchange of hand passes carved a big hole in the Fermanagh defence and Heron blasted the ball into the roof of the net.

Fermanagh responded with three of the subsequent four points before half-time, the pick of them from fullback Aidan Breen.

Derry piled on the misery with further scores from Lynch and Bradley before Sean Quigley ended a 24-minute scoring drought for Fermanagh.

Mark Lynch, who made a huge impact at full-forward in the second-half, punched home Derry’s third goal for a comfortable win.